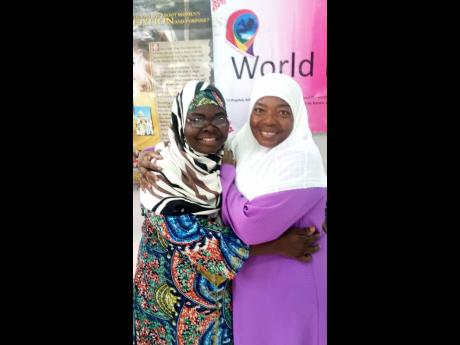 Some female Muslims living in the island are complaining that they are being picked out for special attention at some international borders because of their mode of dress.

According to the women, some immigration and customs officers continue to link the religion to acts by the Islamic State of Iraq and Syria (ISIS) and other terrorist groups.

"There is a lot of fear that we have something under the clothes. When they look at our dressing, they are wondering if there is something inside our clothes that can cause bombing," said Marufah Tijani, a member of the Islamic Council of Jamaica.

"When they see us, they ask if we are ISIS, and if we want to bomb the place. Many times, we will say 'no, our life is much more important to us than yours and I am not into that'," added Tijani.

Her comments came recently following a function to mark the start of Islamic Awareness Week.

"When we are travelling through some airports, we are identified and pulled to one side. They go through our passports after we have already gone through that from the checking contact," charged Tijani.

"When you reach into the immigration, they take you to another corner and they want to go through your clothes, they go through my waist; touching my waist and so on," added Tijani.

She said in one incident at the John F. Kennedy Airport in New York, she was asked to remove her headgear.

"I said 'no, you can't pull my hijab. It is hair, my hair, you can feel my hair, but you cannot pull my hijab'," she said, as she noted that for Muslim women it is not allowed for them to expose their bodies in public or allow strangers, particularly men, to touch them.

According to Tijani, there is less discrimination from immigration officers in Jamaica, as their attire is often seen as 'African' and they are treated with respect.

Abdullah al-Faisal is a Jamaica Islam cleric, who was deported from Britain after spending years in prison there for allegedly soliciting murder and inciting racial hatred.

According to the Islamic Council of Jamaica, there have been at least four serious cases of discrimination being investigated by the council and other agencies in recent months.

This year, Islamic Awareness Week was celebrated under the theme, 'One message, Jesus and Mohammad'.

This was aimed at bolstering public awareness about Islam, and to clarify the misconceptions about the religion.

BENEFITS TO THE HIJAB

For Lena Edwards, another female member of the Islamic Council, there are some benefits to dressing in her religious garb locally.

"I get good treatment sometimes. For example, my family and I have to go downtown to take the Coaster bus home, and the loader men, because they know that other males are not supposed to hand-and-glove us, they will always say 'excuse, excuse, let the Muslim pass', and so on," said Edwards.

"When I come downtown they are always looking out for me. People do pass certain remarks about me sometimes and they are not nice ones. Some of them hurt," added Edwards.

"Sometimes they feel that because we dress like this, we don't smell good and because we have so many children, we are not responsible, but it is just because they don't understand the religion," she continued.

Who was the Prophet Muhammad?
The Islamic Council of Jamaica - propagating the true message of Islam