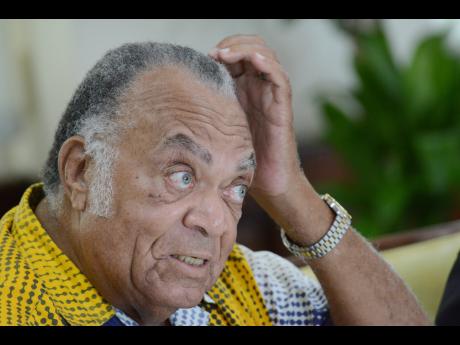 Rudolph Brown
Ambassador Derick Heaven scratches his head as he express concern about the failure of the police and the judiciary to clamp down on instances of theft in the sugar industry. 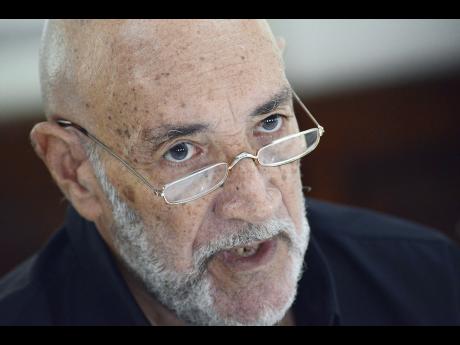 With the police having little success in apprehending criminals who have been plaguing the sugar industry, some major players in the sector believe the cops and members of the judiciary are not taking the plight of the farmers serious enough.

Pointing to cases such as the theft of 26 bulky bearings from the Moneymusk Sugar Factory in Clarendon in 2013, which the police are yet to solve, the players in the sector demanded action as they addressed a Gleaner Editors' Forum last week.

"The attitude of the police and the judiciary to crimes against farmers is frightening. If you had to go to a police station to report a crime against a farmer, and I'm not just talking about 'tiefing', it is the most humiliating exercise," said Ambassador Derrick Heaven, chairman of the board of Jamaica Cane Product Sale.

"Although there is a unit set up in the ministry now to deal with praedial larceny, and they are working hard ... it does not in anyway change the reception you get when you go to the police station. It is like you are on trial," added Heaven.

He charged that even after the police take a report and the investigation is started, the cops, in many cases, fail to follow up.

Heaven pointed to an incident in which a man who allegedly set fire to some 30 acres of sugar cane was held and turned over to the police.

According to Heaven, he asked the police to inform him when the matter would be taken to court so he could attend, but no call came from the cops.

"Three weeks passed and I don't hear anything, and I asked 'what happened to the case?' I heard, 'Oh, the police let him go.' Why? Because him look like him mad," said Heaven. "That is the sort of attitude."

There was public uproar three years ago, sparking the intervention of the Ministry of Labour and Social Security, after security was ordered restructured at three Pan Caribbean sugar factories - Frome, Monymusk and Bernard Lodge - following the theft of the bearings.

The bearings reportedly weighed some half tonne, and was said to be stolen by persons using heavy-duty equipment.

In the wake of the heist, some 130 security guards were sent home on paid discretionary leave and their supervisor dismissed.

"That has died a silent death. That has been quickly subsumed by hundreds of gallons of diesel fuel that finds its way under a fence by a pipe connected to the store," offered Allan Rickards, chairman of the All-Island Jamaica Cane Farmers Association.

While pointing to the theft of the expensive diesel fuel from sugar factories, Rickards was less quick to knock the police and members of the judiciary for their handling of the thefts from the industry.

According to Rickards, stakeholders would better address the problem through efficient management.

"Check Pan Caribbean and let them tell you how much they worked out the cost of producing cane at, which includes: theft of equipment, the order of almost any part from the tractor and transport centre, diesel, fertiliser in the field, chemicals ... the difference is management," said Rickards.