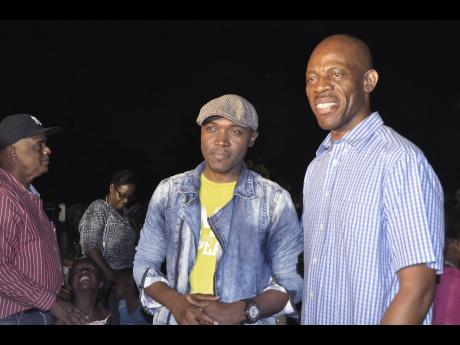 Contributed Photo
Deputy Commissioner George Quallo (left) and Commissioner of Police Dr. Carl Williams (right) join gospel artiste Kevin Downswell on stage during a gospel concert in Rose Town on the weekend, the concert was a call for peace.

Police Commissioner Dr Carl Williams has vowed that his officers will continue to "root out the evil" from the community of Rose Town, Western Kingston, which has been on edge for several weeks.

Leading from the front, Williams, accompanied by two of his deputies - George Quallo and Novelette Grant - unveiled their latest strategy to transform Rose Town into a peaceful

It was divine intervention.

Supported by gospel acts such as Kevin Downswell, the Vauxhall High School Choir, the Rose Town Children's Group, Inner-city for Christ Ministry, the Jamaica Constabulary Force (JCF) Choir and Band, the Tivoli Gardens Marching Band and others, hundreds turned out at the intersection of Harris and George's streets for a gospel concert organised by the police.

It was the first time some were making the trip to that part of the community in weeks.

The residents had been avoiding the area because rival factions have been involved in a bloody gunfight which has had the community on edge. At least three persons have been killed since the conflict began.

Williams thanked the residents for the encouraging signs that he has seen since he met with them three weeks ago.

The gospel concert was held under the theme 'Reassurance' and Hope 'Through Partnership'.

"Continue to work with us and see Rose Town transform into a peaceful community where people can come and go without fear," Williams said.

Acting Deputy Superintendent Dahlia Garrick, head of the Corporate Communications Unit (CCU), said the concert was part of a wider initiative where the police have been working closely with communities to sustain peace.

"We will be going into other communities where there is violence," said Garrick.