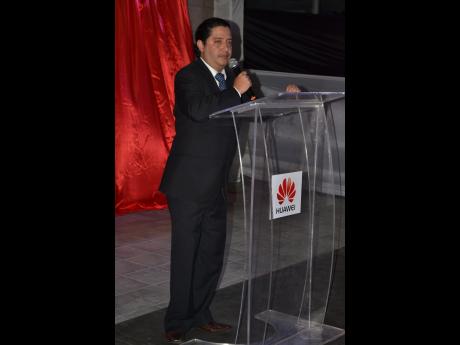 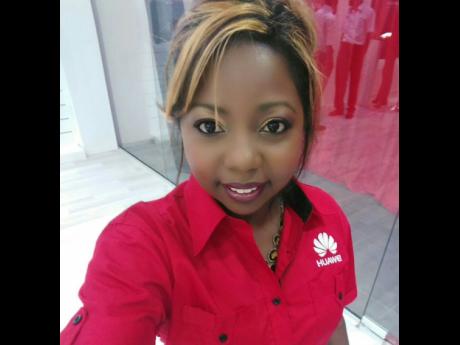 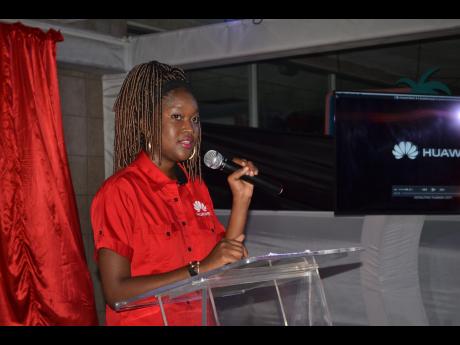 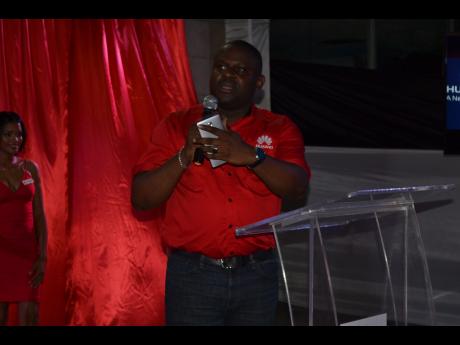 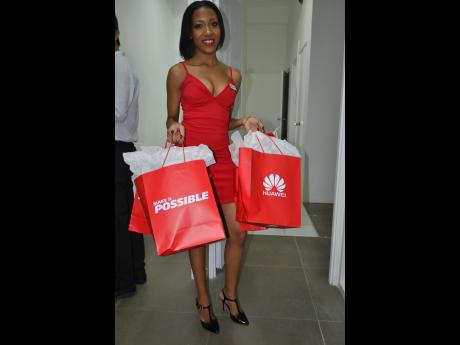 A representative at the Huawei store launch on April 8 at the Tropical Plaza on Constant Spring Road. 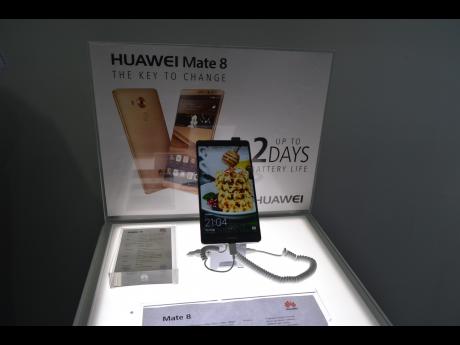 Huawei is a name associated with most of the budget friendly phones that are popular on both Digicel and Flow networks. Huawei seems to be taking the Jamaican market seriously and has officially opened an Experience store in Jamaica to prove its dedication to our market.

The opening occurred on April 8, 2015 at the Tropical Plaza on Constant Spring Road. The store will showcase all that Huawei has to offer, and also promises "A" class customer service for all who walk through their doors. It was also highlighted that the store will offer repair services for Huawei devices in a very timely manner. "There was a need for Huawei local support and with the huawei service center we are now able to provide that, with quick After sales turn around time and excellent customer service. Our customers have spoken and we listened," Chrysta Walker, Marketing Manager.

Huawei also officially launched the Huawei Mate 8 at the store opening. The Mate 8 is the latest phablet from Huawei that comes with a fingerprint scanner, 16MP camera and a 6" inch display. "With its array of features, the Mate 8 is best suited for a business professional who wants a phone that's both productive and stylish," Walker added.

We got a few minutes to fiddle with the Mate 8 and the device seemed promising, but until a full review, we will reserve our thoughts.

Twitter adds two board members amid struggles, lack of diversity

SAN FRANCISCO Twitter is shaking up its board with two new directors as it grapples with slowing user growth and mounting competition from Facebook and Google.

The additions are unlikely to appease critics who have called for the mostly white-male board to diversify its ranks with underrepresented minorities and women.

Hugh Johnston, who is vice chairman and chief financial officer of PepsiCo, and Martha Lane Fox, an Internet entrepreneur, will join the board. Two directors, Peter Currie and Peter Chernin, who were not considered for re-election this year, are leaving, according to a regulatory filing. The moves, made last week, were effective immediately.

Since before its November 2013 initial public offering, Twitter has faced criticism for its mostly white male board. In response, publishing industry executive Marjorie Scardino became the first woman director, and former Google executive Omid Kordestani, who is Iranian-American, joined the board.

"The entire Board is working to bring greater diversity to our ranks. Watch this space," he tweeted on Friday.

Twitter founder and returning CEO Jack Dorsey is in the midst of a turnaround effort of the 10-year-old company.

Revenue is growing quickly, but not as quickly as it used to, and analysts expect that trend to continue. Twitter has more than 300 million users, among them pop stars, Hollywood glitterati and world leaders. But it's dwarfed by other services it's one-fifth the size of Facebook and smaller even than Facebook-owned photo-sharing service Instagram and growth has stagnated.

SAN FRANCISCO - If there are more awkward moments than those involving teen-age sexual experiences, they are the insecure seconds leading up to the deed itself.

But a mother of three aims to both break the tension and confirm mutual consent before sexual intercourse via Yes to Sex, a new app out last Friday for both iOS and Android.

In less than 25 seconds, partners can whip out a smartphone, fire up the app and flash through a series of one-touch agreements that culminate in a request to record a short audio confirmation that the parties have agree to intercourse. A safe word also is generated. Both parties agree to stop having sex if one partner says the word.

The app essentially amounts to a technological record of consent. Once a user closes out of the app, no information remains saved on any phone. But the date, time, place and voice recordings are stored on Yes to Sex's secure servers, which according to a company press release use "the same data encryption as the Department of Defense (and) the records can only be retrieved with court-endorsed orders, ensuring anonymity," the release states.

"As a mother, I was horrified to learn that every month in the U.S. over 1.7 million sexually transmitted infections are passed on and 25% of female students and 6 to 8% of male students are sexually assaulted each year on campuses," app creator Wendy Mandell-Geller said in a statement. "I want to empower teens and young adults to initiate conversations with their partners about consent and the use of protection in a modern, approachable manner."

Of course, the downside for any user is the prospect of watching a partner click a tab that says bluntly, "Sorry, I'm not interested." But better that than proceeding under false impressions.

The Department of Justice said last Friday it is moving forward on a separate legal front to force Apple's assistance in unlocking the iPhone linked to a drug conspiracy case in New York City.

In a one-page letter filed in a New York federal court, Justice lawyers said the government "continues to require Apple's assistance in accessing the data'' on the iPhone of Jun Feng, a Queens, N.Y. suspect who pleaded guilty in a methamphetamine conspiracy case in Brooklyn federal court.

The filing comes a week after the government abruptly withdrew from a similar high-profile legal challenge in California after the FBI was able to access the contents of the iPhone used by San Bernardino terrorist Syed Farook, using a method developed by an undisclosed outside party.

The government's position signals a continuing legal battle that pits privacy issues against law enforcement security concerns. The issue has drawn contrasting legal arguments from tech companies, civil liberties experts and law enforcement officials across the nation and beyond.

Apple is scheduled to file a response to the government's application by April 15. The company did not immediately respond to messages seeking comment Friday.