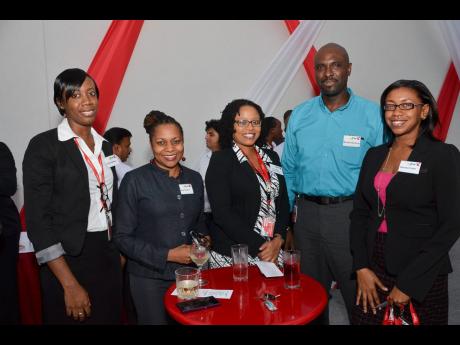 Contributed
In this 2013 photograph, Digicel female middle managers are joined by a lone male during a networking cocktail for employees who were being trained to take up leadership positions.

Telecommunications giant Digicel has devised an internal initiative aimed at empowering and grooming female employees for leadership roles across the organisation.

The series, dubbed 'Women in Leadership Learning Power (WILL Power)', is to be delivered in three phases an intense leadership development workshop that packs learning into four dynamic days, as well as executive coaching and a strict mentoring/mentee programme that matches the participants with senior leaders within the business.

The leadership workshop will deliver its message through simulations, techniques and tactics to build and strengthen leadership and confidence skills, help with career navigation planning, as well as to expose participants to role models for success.

"We are committed to playing our part in bridging the gender gap across all our markets and ensuring that all our employees have an equal opportunity to grow and develop to their full potential," said Kenneth McGrath, CEO, Digicel Caribbean and Central America.

"And this is a commitment that is supported at the highest level, with our chairman, Denis O'Brien, being the biggest supporter," added McGrath.

Since its launch in December 2015, the WILL Power series has received resoundingly positive feedback from the participants who have been inspired and empowered to turn their knowledge gained at the sessions into action.

According to Donna Henry, who participated in the programme, "I have been with Digicel for more than 12 years and have done several training sessions, but none of them compare to the WILL Power training.

"I feel truly empowered to do my job better and to do things I would not have done normally. The visioning exercise has also pushed me to take action for myself, so much so that I've since been able to take two critical actions that I've been avoiding."

Another aspect of the WILL Power series sees the company hosting forums across the region, the first of which was hosted in the Turks and Caicos Island under the theme, 'Developing and Empowering Female Talent in the Caribbean'.