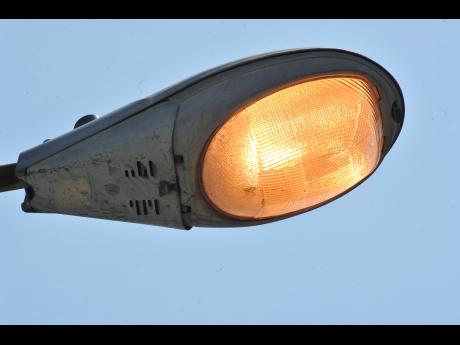 Norman Grindley
A street light burning bright in the daylight.

The Jamaica Public Service Company (JPS) has rejected claims that consumers are paying millions of dollars for energy wasted due to faulty street lights that remain on during daytime hours.

Except for street lights erected as part of the Government's road rehabilitation work, most of the island's street lights are owned and maintained by the JPS.

These street lights are controlled by a photo sensor or photocell, which turns on the lamps in the evenings when sunlight is reduced and turns them back off when the sunlight returns.

But defective photo sensors islandwide has resulted in hundreds of street lights remaining on during daytime hours, and with the Government owing the private utility company some $3.7 billion, there are concerns that it is the average consumer who will have to foot the bill for these non-functioning lamps.

"The parish councils are not billed for daytime burning lamps as street lights are billed based on a calculation of energy used over the fixed hours of operations from dusk to dawn," said JPS communication officer Ruthlyn Johnson.

"Defective photovoltaic cells and blown bulbs are the most common cause of street light failure. Each month, the JPS repairs thousands of lamps, completing 6,000 for the first quarter of 2016.

"We are continuing our efforts to significantly improve this area of operation as we are not satisfied, even though we strive to do repairs as quickly as the resources allow," added Johnson.

Recently, our news team counted more than 50 street lights in the Corporate Area that had lamps burning during the daytime.

Other areas with defective street lights included Half-Way-Tree and Oxford roads; inside the St William Grant Park; Old Hope Road; and Bayfarm and Hagley Park roads. This is a problem for the Kingston and St Andrew Corporation, which is billed by the JPS.

"A system is in place that we have to rely on our technical service people and the councillors to actively scan their divisions, and also when citizens call in, to report defective street lights," said Town Clerk Robert Hill.

"We channel this report straight to JPS and the company usually acts within a short time to make the repairs. My experience is that once a report comes in and it is reported to them, in four to 48 hours it is attended to," said Hill, who, earlier this year, said that the KSAC paid the JPS some $50 million for its utility bill monthly.

There have been some concerns that the JPS has not been fixing the defective street lights because of the amount it is owed by the State, but the company was quick to reject this claim.

"While we do have resource constraints given the level of arrears, the JPS is committed to improving the quality of service in the area of street lights," said Johnson.