Sewell gets full US tertiary scholarship 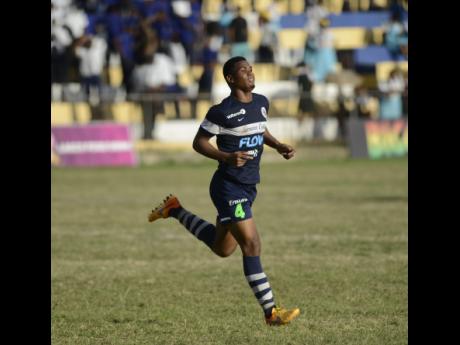 Zeron Sewell of the Springfield community in St Thomas was recently listed as one of five players of the Jamaica College Under-19 Manning Cup team to join the Virginia Commonwealth University (VCU) recruits in Richmond, Virginia, United States.

The 18-year-old has received a full scholarship that will fund all four years of his university education.

"All I'm expected to do is to attend every class and to maintain an average GPA at all times, and also to perform at my best on and off the field," he said.

When asked about how he felt when he heard that he was being provided with the unique opportunity to play for a university overseas, Sewell said he was both excited and humbled.

The past student of the Morant Bay High School and Jamaica College told Rural Xpress that he remembers kicking his first ball in his backyard at the young age of five years old.

"I started playing for Morant Bay Primary at the age of nine when I was in the fourth grade. I played three years of football at Morant Primary, winning three titles. I went to Morant Bay High School and I played for the entire five years, playing three seasons of DaCosta Cup. I went to Jamaica College in sixth form, spending two years and experienced playing Manning Cup and won five titles within the two years," Sewell said, adding that being named the Double Manning Cup and Olivier Shield Champion and the LIME Super Cup Champion are among his best achievements so far.

According to him, "Zeron has worked hard for the past two years. He is a good student in the classroom and a great player on the field so when the opportunity arose I had to recommend him."

Sewell said that he has always dreamt of becoming a professional football player, and the VCU scholarship will bring him closer to his dreams.

"This will do so in a lot of ways. I will be playing football and scouts and coaches will be watching. I will be more highlighted and will be able to market myself. Another thing is that America is a very large country which presents multiple opportunities to young student athletes like myself," he said.

The young 'baller', who lives with his grandmother, shared that he is inspired by his entire family but singled out his parents, grandmothers and his aunt.

"Also, I admire Cesc Fabregas who plays for Chelsea in the Barclays Premier League. He is my favourite player. I admire his humbleness and his style of play. I also admire his dedication towards and love for the sport," he said.

Sewell is expected to start university in January, where he will be pursuing a degree in business foundation and playing for the VCU Men Soccer Team.

According to him: "Football is life. It has opened so many doors for me and has also taken me places I have only dreamt of being."