Ann-Marie Graham Up from the dust 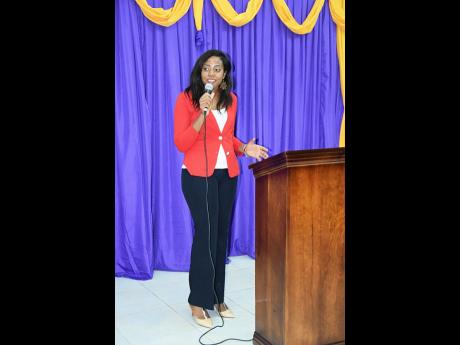 Contributed
Ann-Marie Graham is now into full-time ministry, is a motivational speaker, and is the owner of Up from the Dust to a Life of Purpose Ministries.

When Ann-Marie Graham thought her life was meaningless, she was encouraged by the unlikeliest of persons: the now incarcerated dancehall artiste Vybz Kartel.

Graham, who was part of the aborted Vybz Kartel Reality Show Teacha's Pet, did things she now regrets.

"On that show, I said and did things I shouldn't have said and done, but one day, Vybz Kartel told me that I am a smart one. He said that I am different - I am a child and he is sending me home. He saw something in me that I didn't see in myself," Graham recalls from that experience.

Kartel reignited a thought she had as a child growing up - that she was meant to do great things for God. However, it would be a while before she got to that reality in her life.

Even before her Kartel-reality foray, her self-esteem started chipping away when she got married at 18 years old, fresh out of high school, to the man she thought would complete her.

That dream was shattered just five months later when he told her he didn't love her. He had only been attracted to her innocence!

Crushed, dejected, having whatever residue of self-worth she had totally destroyed, she started entertaining thoughts of suicide and living recklessly.

"I was devastated. In my childhood years I suffered from abandonment issues because my father wasn't there for me and life was very difficult for my mother. When I got married, I carried my emotional brokenness into the marriage, and my husband wasn't very understanding, and so that contributed to the breakdown of the marriage," she told Family and Religion.

Two years later, depression was Graham's constant companion as she felt so unloved. At some point, she just gave up because she was feeling completely broken. Her stubborn heart no longer wanted God.

She might have given up on God, but He didn't give up on her, even after she joined the reality show as she was encouraged to pursue the goodness in her.

She went back to Montego Bay, St James, but her reckless lifestyle continued - going to parties with friends, wearing X-rated outfits, and getting drunk.

"Life had no meaning to me, and in my heart, it didn't matter if I lived or died." Or so she thought until the summer of 2012.

"I remember visiting a church I had never gone to before. When I got there, the pastor gave me a prophetic word from God. He told me that God showed him where He was going to use me mightily and that I would travel the world preaching the gospel and influencing others. He also prophesied that I would have a business and that one day I will marry the man that God has for me," Graham added, noting that she couldn't believe that God still wanted to use her after all that she had done.

"In that church, I knelt and I surrendered to God. After I left that pulpit, I didn't have the desire to drink or party anymore. It was all about work, church, and home."

As if all she had been through was not enough, less than a year later, Graham fell ill and got baptised shortly thereafter. She has struggled with that illness since 2013 until two months ago when she was completely healed.

Graham has since written a book called God's Healing Promises, which is available for purchase on Amazon. She is now into full-time ministry and is also a motivational speaker and the owner of Up from the Dust to a Life of Purpose Ministries.