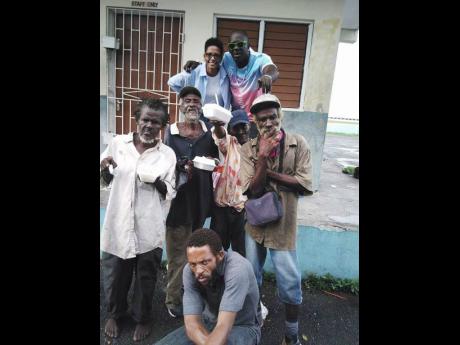 Team Ocho Rios representatives from Jamaican Madhouse Team (standing at back) sharing a moment with some of the homeless persons they fed. 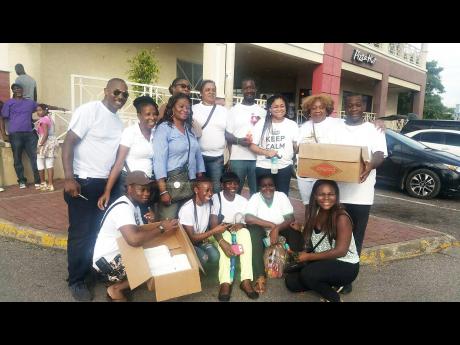 Team Montego Bay representatives from Jamaican Madhouse Team getting ready to hand out food and supplies to the homeless.
1
2

On Jamaica's National Heroes Day, an unconventional set of heroes were on the job in six parishes across the island. Thanks to their overwhelming humanitarian act, close to 1,000 homeless persons were treated to hot, cooked meals as well as other well-needed items.

The 80 members and volunteers of the Jamaican Madhouse Team, based in the United States, were undertaking the second of what is projected to be an annual event, in St James, Kingston, St Catherine, St Ann, Clarendon, and Portland.

Indeed, it was all smiles from the 836 needy individuals who partook in the 'Heroes Day Dinner' on Monday.

According to Shena Carty, who spearheaded the multi-parish initiative, this year's mission was a huge accomplishment for the team, which last year fed some 47 individuals between Old Harbour and May Pen.

"Our goal this year was to feed 100 persons between Old Harbour, May Pen, Spanish Town and Kingston, but quickly the numbers started growing as other parishes got involved," Carty told The Sunday Gleaner. "We anticipated 300 but came up with a staggering 836, with Kingston and Spanish Town alone having 525."

It is understood that the team that was based in Montego Bay fed 73 persons, while the Ocho Rios and Portland teams fed 123 and 60 persons, respectively.

"The volunteers were happy to go out and support the needy. It was a selfless act. On a holiday when many others celebrated with family and friends, the sacrifice was made for strangers who are less fortunate," said Carty. "The recipients were grateful and gracious. Many expressed that they hadn't had food in days, and some were even asking for clothes and money."

She shared that the project exposed a few of the social issues the country faced, noting that drug addiction seemed to play a huge role in the number of homeless persons they encountered on the streets.

"The majority of the people we fed were drug addicts living in bus parks in Ocho Rios and St Ann's Bay. It's alarming that this population has grown so significantly. I think we must now put our heads together and figure out how to best tackle the problem of drug addiction and homelessness in our communities," stated Carty.

Interestingly, after last year's initial staging, Carty said the organisation received 'thank you' messages from persons who saw missing relatives in photographs published of the event.

While the project is the brainchild of the Jamaican Madhouse Team, Carty said their efforts were bolstered by funds and supplies donated by local and international entities.

'It's not an easy task planning and coordinating a venture like this from New York, but we did it," she said. "Planning, communication and execution were the keys to making 2016 a success. Like I always say, 'teamwork makes the dream work'."

Jamaican Madhouse is already making plans for next year's project. The plan is to target at least 2,000 homeless persons across the entire island.

"We encourage anyone who would like to be a part of this event to contact me, Shena Carty, via Facebook or 518-812-3398 via WhatsApp, or any other member you know from the organisation. All donations of funds, goods, time and supplies are accepted and appreciated," said Carty.

She added, "There may possibly be a sweet treat planned for Easter for every parish. Please, I'm asking you to join us in making a difference on our island. One team, one dream."

Madhouse's work in Jamaica actually continues next Saturday, as the Westmoreland team will be facilitating dinner next at Beckford Plaza, starting at 2 p.m., with a plan to feed 50 persons.