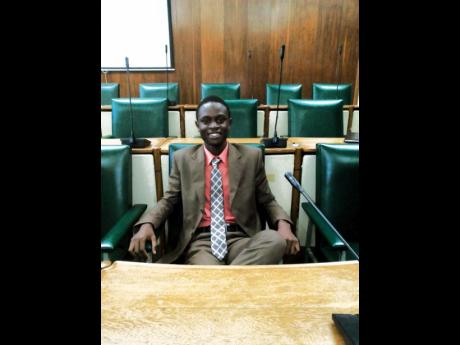 Clarendon College head boy Ackeem Everton Clarke is today reaping the fruits of his voluntarism as he copped the award for the Most Influential Youth Leader - Male at the recently held Social Development Commission's Community Incentive & Grants Programme Awards held at Versalles Hotel in the parish.

Clarke told Rural Xpress that the award represents recognition of his efforts and perseverance.

"I received the award on behalf of all the young people out there who continue to give their time and endless service for the betterment of others," he said.

Founder and executive director of a non-profit youth-led organisation called Aim for Change, the focus is on providing young people with training opportunities in leadership, advocacy, knowledge of civic responsibilities and a hands-on experience in making a difference in their community.

"Prior to starting my organisation, I served as a mentor at Chapelton All-Age School, where I spent my afternoons assisting students who faced academic challenges and also serve as a mentor to delinquent young men at the same institution, helping them to stay on a steady path," he said of his many community involvement.

Clarke is currently mentoring young men at his school in partnership with the guidance department.

"I also mentor unattached youth as far as Kingston, helping them to seek opportunity for the betterment of oneself," he said, adding that another programme he will be spearheading soon is the Boys 2 Men mentorship at Ebony Grove and Male Empowerment Network.

Clarke said his motivation to be involved and impact lives in this way is motivated by a quote from Mother Teresa, "if you can't feed a hundred persons, then feed one".

"The reality is that I always wanted to give back, but I always question myself what could I give. If I owned a bank, possibility is that I would give money, if I owned a supermarket, the possibility is that I would give food items, etc. But in my case, I own nothing, but I am good at public speaking, am a social agent and am good at convincing people so mentoring was my call, in addition to see the global impact young people like myself is making, it is truly a driving force to get involved," he said.

Clarke said the rewarding moments for him are very simple. When he sees the impact his contributions made on someone's life - for him, nothing can beat that.

If there is a philosophy that guides his life, it is the reality that he is not on the Earth to see how important he can become, but to see how much difference he can make in the lives of others.

Clarke is reaching out to others to be mentors to young persons.

"Being a mentor doesn't require advanced degrees or special skills, just a few basic qualities - a sincere desire to be involved with a young person; respect for young people; being an active listener; having empathy; seeing solutions and opportunities; and being flexible and open," are words from the budding political scientist, historian, parliamentarian and most importantly a philanthropist.