Walls that ‘pee’ back! - Jamaica could introduce paint that bounces water back on the person peeing 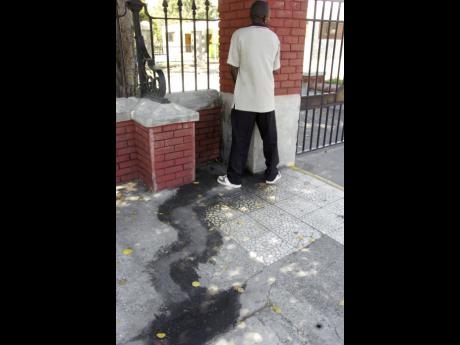 Norman Grindley
With the special paint being produced by a company in Miami, the walls of the St William Grant Park could ‘pee’ back on this man seen peeing there.

The national disgrace of persons, mainly men, urinating on public walls could be addressed if Jamaica copies a campaign introduced in Germany to wet persons who pee in public spaces.

And it could be more economical than the thousands of dollars which agencies such as the Kingston and St Andrew Corporation (KSAC) spend to clean the areas left 'renk' by persons with no pride.

Julia Staron and other members of the St Pauli Interest Community in Hamburg, Germany, poured their frustration into action, introducing to the district a hydrophobic paint which bounces water droplets off.

This means that a person runs the risk of wetting his pants and shoes if he tries to pee on a wall covered with this paint.

"The idea arose with a joint brainstorming of the district management and advertising agency and other representatives of the district," Staron told The Sunday Gleaner from Hamburg last Tuesday.

"We have the most problems with male guests at St Pauli because it is an amusement and party district with about 24 million guests a year. We painted the walls and corners with this repellent lacquer," said Staron.

"This varnish helps very well because the urine remains completely off. The walls are much easier to clean and it does not stink anymore. And in some cases, the men are also getting their pants wet; a good education," added Staron.

"The paint is actually relatively expensive. But when you see the effect, it's a very good investment. We just painted. That was all," she said, adding that the group also launched a public-education campaign and mounted signs warning individuals about the paint.

The KSAC spends more than $3 million each year to clean the walls of the St William Grant Park in downtown Kingston, where, despite a $121-million upgrade in 2010, persons continue to urinate on and around the perimeter fence of the park, which has well-maintained bathrooms.

"Right now it costs more than $300,000 a month. That includes payment for the trucks, the material, and also labour," said Alrick Francis, city inspector at KSAC. "We are trying to do it at least twice per month."

But the pee-resistant paint could be a one-off expenditure of much less than the more than $3 million.

Courtney Haltiwanger, a customer service representative with the Florida-based Ultra Tech International Inc, one of the companies which sell the pee-resistant paint, told The Sunday Gleaner that the substances contain microscopic elements that must be sprayed on in two coats.

Haltiwanger said a quart of the bottom coat is sold for US$150, (J$19,400) while the top coat goes for US$300 ($38,800) per quart, plus additional packing costs. It is not yet clear how much paint would be needed for the walls of the St William Grant Park.

She noted that the paint is hazardous and certain local and international licences would have to be acquired by any Jamaican entity before it could be sold to them.

The other drawback is that the paint lasts only a few months in extreme temperatures, but Haltiwanger said Ultra Tech is "coming out with a new coating, which does stand up better to abrasion and also to the sun. That will last much longer".