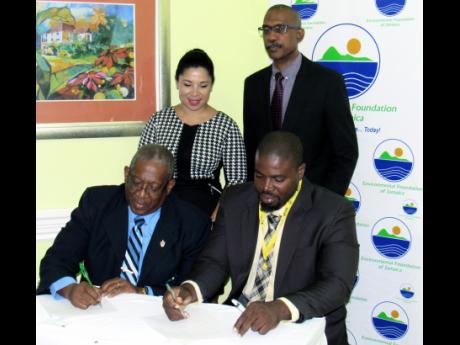 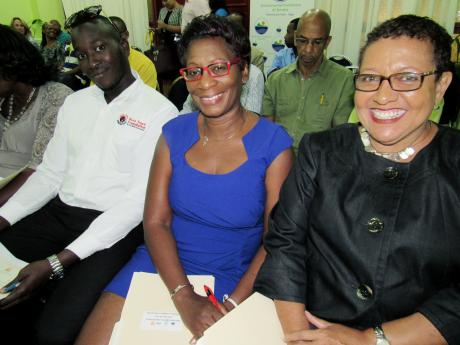 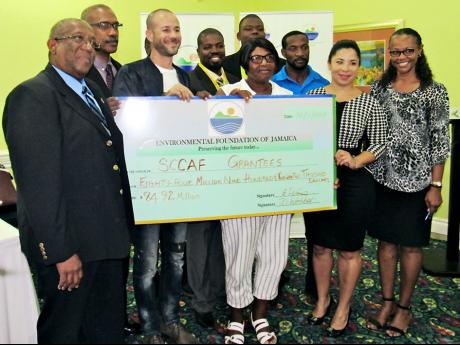 Contributed
Special Climate Change Adaptation Fund administrators from the Environmental Foundation of Jamaica and beneficiaries show off the cheque representing the most recent awards at the signing ceremony last Monday.
1
2
3

WITH A changing climate that threatens to wash away entire communities and derail livelihoods, local civil society organisations and small businesses are being empowered to respond - with capital.

This is thanks to financing made available through the Pilot Programme for Climate Resilience (PPCR).

There exist two financing mechanisms, according to Dr Winsome Townsend, project manager for the Adaptation Programme and Financing Mechanism under the PPCR.

One is the Special Climate Change Fund (SCCAF) that is being administered by the Environmental Foundation of Jamaica.

The SCCAF, according to project documents, is "to finance adaptation and disaster risk-reduction projects and cover associated programme management costs".

"Grants from this trust fund will be accessed by community-based organisations, other civil-society groups and selected public-sector agencies, for clearly defined high-priority activities, particularly related to building the resilience of the natural environment and contributing to livelihoods protection and poverty reduction," the documents revealed.

Last Monday, the first 18 beneficiary organisations were awarded sums to the tune of $84.9 million to undertake projects designed to enhance resilience at the community level.

"Twelve were pending approval. Those 12 have now been approved. So out of that first call, approximately 30 have been approved," she added.

PROJECTS TO BE PURSUED

Projects to be pursued include water harvesting and greenhouses, aquaponics systems and food processing, as well as various ecosystem restoration initiatives.

Townsend said another call will be issued later this month or early March.

Five projects have been approved to the tune of some $25 million, Townsend said. However, the overall level of interest in the line of credit - administered by JN Small Business Loan - is not immediately clear.

"Because it has started soft, we don't know yet. We can't at this time make any determination as to the level of enthusiasm," Townsend said.

Still, she is hopeful for its success, given what is at stake.

"The micro, small and medium-size businesses are at greater risk because of their capacity to respond. They are not as resilient as the more established or bigger enterprises," Townsend noted.