Errol Crosby
Tracy-Ann Hall is all smiles as she shares her amazing journey from repeating fifth form to being among the finalists for a US$1m teaching prize. 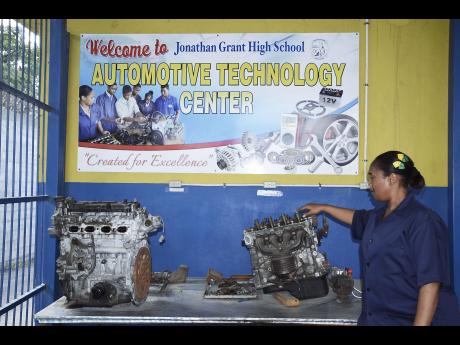 Errol Crosby
Tracy-Ann has big plans for this workshop should she win the US$1m prize. 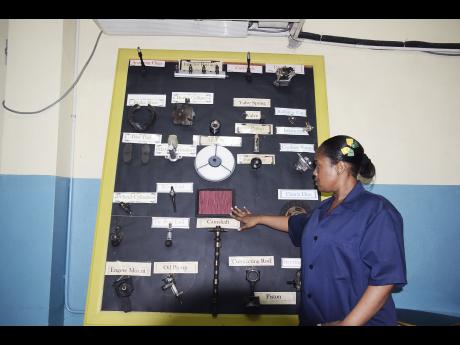 Errol Crosby
Tracy-Ann is all business when it comes to teaching automotive technology.
1
2
3

Tracy-Ann Hall could find herself US$1 million richer before the end of this month, but that would not tempt her to leave the classroom where she does what she loves - teach.

Hall, who teaches automotive technology at the St Catherine-based Jonathan Grant High School, is among 10 finalists selected from a pool of 20,000 nominations and applications from 179 countries for the Varkey Foundation Global Teacher Prize 2017.

Hall will be leaving for Dubai on March 14, with the winner to be announced at the Global Education and Skills Forum on March 19.

"I have my plans already, so if that money lands in my hand I know exactly what to do with it," said Hall, who expressed gratitude to the ruler of Dubai, Sheikh Mohammed and Sunny Varkey for their brilliant programme designed to celebrate teachers.

"One plan is to take my automotive shop at Jonathan Grant High School up to international standards," said Hall.

"I want to ensure that we have all the equipment we need like diagnostic machines, wheel-balancing machines, hydraulic lift, and just ensure that the classroom is at a good standard where the students can learn, so that when they go out, they are at least Level Two.

"We are doing Level One NCTVET (National Council on Technical and Vocational Education and Training) exam now, but I want to actually have the shop up and running, so that we can take them up to Level Two," added Hall.

The 42-year-old Hall, who has one biological daughter and an adopted one, fell in love with auto mechanics before falling in love with teaching.

The St Catherine High School past student had to repeat fifth form, having failed to secure passes in any of her subjects due to the undiagnosed reading disorder dyslexia, but that did not prevent her from gravitating towards auto mechanics, in which she excelled.

"It started at St Catherine High, where I chose auto mechanics as the vocation area, and I really loved it. After leaving St Catherine High, I went to a garage on Old Harbour Road and then I moved on to the Police Transport and Repairs Division. Working at the transport and repairs, I got a young man to teach and I really enjoyed sharing, and I decided to attend VTDI (Vocational Training Development Institute)," said Hall.

Hall spent nine years at transport and repairs before she applied to the VTDI, but was not accepted at first as she was not sufficiently qualified.

She acquired a diploma in supervisor management at the University College of the Caribbean and then reapplied to VTDI, where she completed a diploma in education.

In 2000, she took up her first teaching job at St James High, which she described as a life-changing event.

According to Hall, "I got some students who were basically written off by other teachers, saying that they were no good. I got these students, most of whom couldn't read properly, and I started a book club with them by sourcing books from Food For The Poor.

"And I encouraged these young men, and one ended up becoming the head boy of the school, and we had quite a few on the choir and taking part in other school activities. At the end of the day, their parents were so grateful to me for having turned their lives around."

She said in her time at St James High, the school recorded its first 95 per cent pass by its automotive class in its history.

Hall went on to teach at Ocho Rios High before taking up duties at Jonathan Grant High School in 2013, where she now teaches automotive technology to 76 students spanning grades nine, 10 and 11, including nine girls.

She credits her success in positively impacting students to the partnership she forms with them and their parents; so much so that it was a parent who nominated her for the global teaching prize.

"They know exactly what I am here for and they know what they are here for. Once they know that and we work together, we can achieve ultimate success," said Hall.

"And I do incorporate the parents as part of this strategy, because once I have contact with the parents, I know who I am dealing with and how I can deal with the students, and the different approaches I can take to impact lives," added Hall, who has now earned her first degree in human resource management and is now waiting on Northern Caribbean University to see if she is accepted to do her master's in education.

Dubai excites, homecoming disappoints - Teacher peeved by local response after she misses out on US$1m bounty