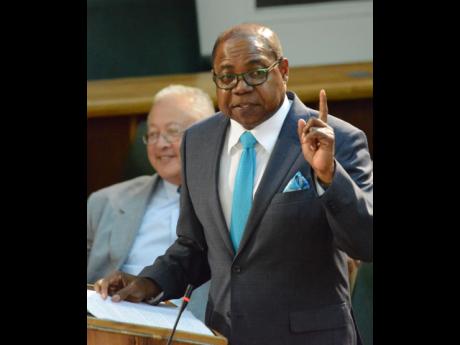 File
Tourism Minister Edmund Bartlett making his contribution to the Budget Debate in the House of Representatives yesterday.

Tourism Minister Edmund Bartlett has outlined a structure he is hoping will satisfy tourism players who are upset over the planned move to transfer the funds under the Tourism Enhancement Fund (TEF) into the Consolidated Fund- the Government's main account.

"Under the new arrangement, money from the fund will be placed in a special subsidiary account of the Consolidated Fund and the money will only be used for tourism expenditure," he told lawmakers yesterday in his address to open the 2017-2018 Sectoral Debate in the House of Representatives.

According to Bartlett, Finance Minister Audley Shaw has "promised" the Jamaica Hotel and Tourist Association (JHTA) and other stakeholders to put the commitment "in writing".

He gave no timeline the completion of that process.

The JHTA has reacted angrily to the proposal to transfer the resources of the TEF -which is funded by a US$20 tax on airline tickets to Jamaica - into government coffers.

Shaw and Prime Minister Andrew Holness have argued that while a policy is yet to be finalised, a way has to be found to align the resources of cash-rich public bodies with national objectives.

But, the JHTA and other players, including Noel Sloley, an Opposition senator who has called for Bartlett's resignation, have hit back saying the country's tourism product will be affected as money will be diverted or even misused.

Bartlett argued that the public financial management system, under reforms through the International Monetary Fund deal, makes the Government "obligated" to change how public, but independent, government bodies operate.

He said even with changes to the TEF, the requisite accounting and administrative systems "will be put in place" to enable sector interests "to continue to have full access to project funding".

"We have been given the commitment by the Ministry of Finance that regular meetings on the performance of the fund will be held and monthly reports on expenditure will be provided by the Accountant General's Department," Bartlett said.

The tourism minister also said a mechanism will be put in place so the TEF will continue to monitor projects it's funding.

Other public bodies being eyed now by the Government include the Culture, Health, Arts, Sports and Education Fund and the Jamaica Civil Aviation Authority.

A forensic study on the use of the more than $200 billion in surpluses in public bodies is to be done, Shaw has said.