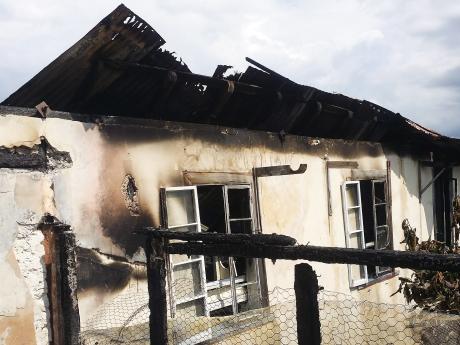 Courtney Locke
Burnt-out sections of the property at Westwood High School. A massive fire at the all-girls school yesterday morning resulted in the kitchen, dining room and storeroom being gutted. 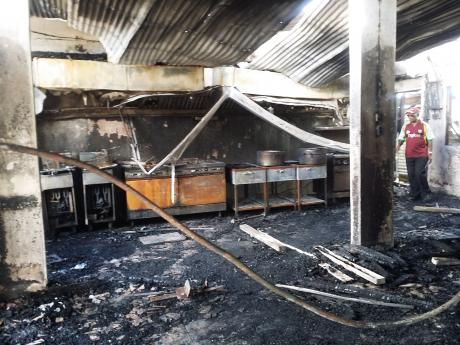 Courtney Locke
Inside the damaged kitchen at Westwood High. 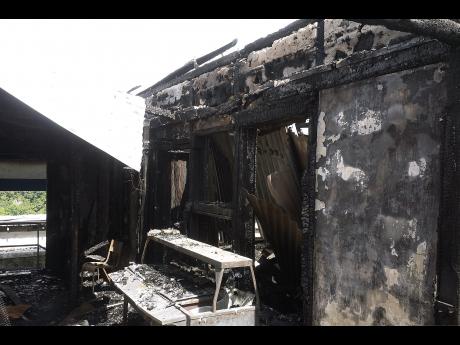 Except for the firefighters and police investigators who were combing through the burnt out rubble, the Westwood High School in Stewart Town, Trelawny, which was the scene of a major fire on Tuesday night, was yesterday quiet to the point of being almost eerie.

Just hours earlier, the 135-year-old all-girl school was a blazing inferno, as firefighters battled to contain the raging fire which gutted the kitchen, dining room, changing room and storeroom on the property.

"The call came in that a section of the school's compound was on fire shortly after 10 p.m.," said Roland Booth, a deputy superintendent at the Trelawny Fire Brigade. "One unit responded, and it was joined at the scene by firefighters from Brown's Town and St Ann Bay."

While the firefighters were not able to save the buildings that were destroyed, they were able to prevent the fire from spreading to the adjoining structures, which, like the gutted areas, are constructed from a mixture of wood and concrete.

There were no reports of injuries, however, some students suffered from breathing disorders affected by the thick smoke which engulfed the compound, while others feared.

"It was somewhat frightening, especially when we were told to vacate our dorm rooms and move to another building," a 10-grade boarder who is now safely home in Montego Bay, St James told The Gleaner. "We are naturally very sad about this because Westwood is our home away from home."

Arrangements to be made for students sitting exams

In the aftermath of the fire that destroyed sections of Westwood High School in Stewart Town, Trelawny, the administration, which is headed by principal Karen Francis, took a decision to suspend classes for yesterday and called in parents to retrieve students who are boarders at the institution.

While normalcy, especially for the boarders, is unlikely anytime soon, since the kitchen and dining area have been destroyed, the principal said arrangements would be put in place to facilitate the upper-school students, who are currently preparing for external examinations.

"We will not be able to facilitate all the students just now," said Francis, who updated the Ministry of Education on the state of affairs at the school yesterday morning. "The board will meet and short-term plans will be put in place for the other students."

Efforts to get an estimate of the damage proved futile, but expectations are that the overall cost will run into millions of dollars.

Investigations are also under way to determine the cause of the fire.

Westwood, which is one of the nation's oldest and most illustrious high schools, has produced a number of outstanding past students the likes of Wyvolyn Gager, a former editor-in-chief at The Gleaner; and distinguished educator, Dr Angela Samuels-Harris.