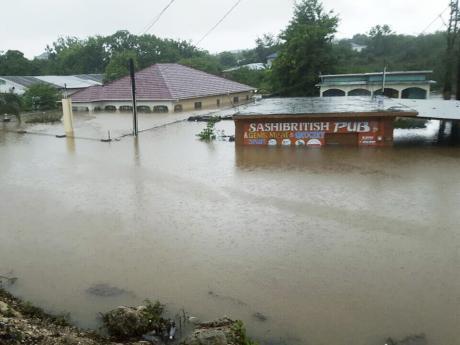 File
Several houses in Palmetto Pen, Clarendon, were almost covered by rising waters as a result of heavy rains in April.

Several communities in Clarendon are again under water due to heavy rainfall.

The Gleaner-Power 106 News Centre has received reports that communities in the south of the parish are being mainly affected by the heavy downpour which, residents say, has continued since yesterday evening.

Reports are that water levels are rising in Four Paths in the south-west; while flooding has been reported in Tollgate and Comfort.

Mayor of May Pen and councillor for the Rocky Point Division, Winston Maragh,  told our news team that several communities in his division have also been flooded due to the poor drainage system.

He says although the drains were cleaned following the heavy rains a few weeks ago, the drainage system has not been able to handle the current rainfall.

The Meteorological Service says the heavy rains are being influenced by a trough, which is expected to linger across Jamaica and the central Caribbean for the next three days.

Clarendon was one of the worst hit by flood rains in April, which left nearly $500 million in damage across 10 parishes.