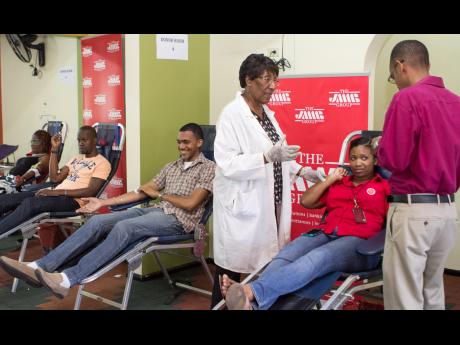 File
Members of the JMMB team playing their part during a blood drive organised by the group.

Some of Jamaica's leading boys' schools are among the top groups of blood donors, leaving officials of the National Blood Transfusion Service (the Blood Bank) impressed.

Igol Allen, blood donor organiser at the Blood Bank, said the schools continue to top corporate entities and other groups which donate blood at a time when it is collecting only 50 per cent of its demand.

"I must commend the high schools, especially the boys' schools. Calabar, Wolmer's, Kingston College and Jamaica College had more than 100 donors coming out recently," said Allen.

"What we find is that the males end up more likely to donate, and there are fewer of them who defer," added Allen.

He said while all-girls' secondary schools and co-educational institutions also factor high on the donor list, the boys outstrip them.

Allen shied away from naming the hospitals or parishes with the highest demand for blood, offering only that cancer patients continue to be among the top persons in need of the vital liquid.

The Blood Bank supplies blood to all the major hospitals in Jamaica, and Allen noted that the demand varies.

"If there is high amount of trauma in a particular location, then the argument may be made that there is a higher demand."

Allen noted that students above 16 years old can donate blood without the consent of their parents, and are screened by medical personnel before being allowed to donate.

Cancer survivors, persons who lived in England between 1982 and 1986 and persons who have travelled to malaria-infected countries are not allowed to donate blood.

Persons with full blown sickle-cell disease also cannot give blood, but persons with minor traits may be allowed.

Allen noted that alcohol or cigarette use is not a problem 24 hours after consumption, but marijuana smokers are prevented from donating blood for three days after smoking.

Persons with tattoos are allowed to donate blood once the tattoo is more than one year old.