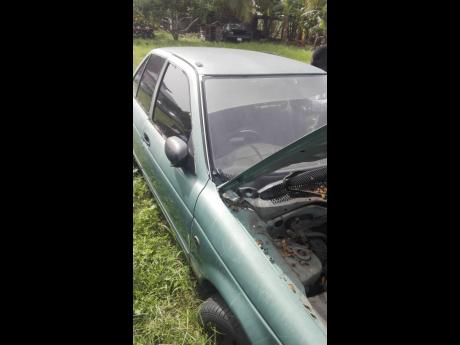 Contributed
The motor car which Allan Carter says was scrapped while in the custody of the St Elizabeth police.

The Office of the Public Defender is seeking justice for several motorists whose vehicles were scrapped while in the custody of the police.

Days after The Sunday Gleaner first reported the case of Allan Carter whose motor car was scrapped while it was being held by the police in St Elizabeth, the Office of the Public Defender confirmed that it has received reports of several similar cases.

Victor Hemmings, special projects manager at the Office of the Public Defender, told our news team that the practice is one of great concern.

He identified two police stations in the Corporate Area as among the main problem areas.

"The Constant Spring Police Station seems to be the one that we get complaints about more than the others. Second to that would be Elletson Road," said Hemmings.

"I have about five cases dealing with right now, at least two for Constant Spring Road dealing with and another two from Elletson Road. I also made brief checks with another investigator in Kingston and that person had two other cases," said Hemmings, scoffing at the explanations offered by some senior officers with responsibility for the police stations.

"I had one case in which the vehicle was seized because of lack of documents, no insurance or fitness and it was taken to the station where it went missing," said Hemmings.

No trace of vehicle

"When the owner went back, there was absolutely no trace of the vehicle, and the police cannot account for it. They couldn't even provide a diary entry in relation to it," added Hemmings.

That incident took place at the Elletson Road Police Station, and Hemmings said claims by the cops as to how the vehicles are scrapped are questionable.

He alleged that some members of the police force have stated that they can provide no assurance that vehicles in their custody will be safe.

"Sometimes the police tell us that the perimeter fences can be breached and persons come inside and steal parts off the vehicles. Although we listen to that and appreciate that, as far as we are concerned they have a duty to protect the property," said Hemmings.

Checks by our news team at the two stations identified as the main problem areas, Constant Spring and Elletson Road, revealed no clear opening for persons from the streets to scrap the vehicles.

The areas housing seized motor vehicles at both stations seemed properly fenced with the gates padlocked and regular patrols.

But one policeman suggested that groundsmen at the stations have access to the vehicles and could be somewhat responsible for the theft of the parts.

"I cannot say that policemen are involved, and they could very much be involved. But I have done investigations before and we have found out that it was the groundsmen who were removing the parts," said the cop who asked not to be named.

"We have even dealt with a case where a gun went missing from the station, and it was found that the groundsman took it," added the cop.

In the meantime, Carter, whose motor car was scrapped while it was held by the police in St Elizabeth for some five years, has secured the service of a lawyer and is seeking compensation for the damage to his vehicle.

But he expects that this could be some time in coming. "Many times, as with many of our matters before the Attorney General's Chambers, it is a long and tedious process and they take some time to give us a response," said Carter.

That is a view shared by the Hemmings, who told our news team that only a few persons attempt to secure compensation for their scrapped vehicles as they are turned off by the lengthy wait.