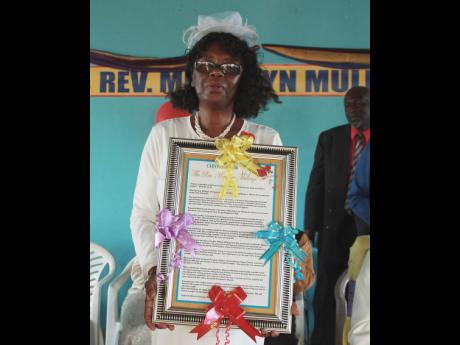 More than 150 well-wishers and worshippers from across the country packed into the Foursquare Church in Annotto Bay, St Mary, recently for an appreciation service in honour of a pioneering and popular minister.

For more than four decades, Reverend Mervelyn Mullings has pushed boundaries while spreading the Gospel and is credited as the first female president of the Foursquare Church in Jamaica, and the first woman to sit on the church's executive branch, the Global Council.

Mullings, who has pastored at the Newlands Foursquare Church in Portmore, alongside her husband, for the last 43 years, revealed that her desire to preach was stoked from an early age.

She said: "I'm originally from Crawford, St Elizabeth, just two miles from the border with Westmoreland, and got saved at 12 years old in October 1964. I started ministering as a child and remember going to Arlington, 12 miles away, with another child to go and preach. I started preaching and people started being saved. God touched my life and sent me off in that direction.

"I have served in various areas of the Foursquare Church since 1970, and graduated from Bible College in 1974 with a diploma in ministerial studies. As a people person, I have been able to touch all persons, from the youngest to the eldest, and I think just doing it for the love of God and the love of people has made me who I am."

As a leading female pastor, Mullings, 65, acknowledges that sexism is prevalent in the clergy, but refuses to recoil or be deterred from her mission.

She explained: "Being a female minister can be difficult, but not really within [the International Church of the Foursquare Gospel] because it was founded by a woman, Aimee Semple McPherson, in the early 1920s. So with that, my organisation is accustomed to and validates women in ministry.

"But many of my peers didn't think it was right. I remember when I was president, one minister said to me that it as an indictment against Foursquare to have a female as its national leader. These things never really moved me because I know God has called me and wherever He plants me, that's where I'll stay. People who know me well know that if you want me to do something, just tell me that I can't do it."

Looking ahead, Mullings hopes that Jamaica's many denominations will continue to work together in the national interest as she believes that the individualist approach to religion has proved to be unsuccessful.

She explained: "I think the biggest religious issue facing people right now is confusion; this one says my version is right and that one says yours is wrong. But if someone comes and asks, I will tell them 'Yes, I'm Full Gospel,' and if they say are you Jesus Only, I will tell them 'Oh sure'. I'm a Jehovah Witness and a Pentecostal. I'm all these things in one. People are confused because of how we present the ministry to them.

"My greatest wish is for all the churches to join forces and place a greater focus on social outreach in our individual communities, meeting the social, spiritual, physical, and emotional needs of the people within the communities we serve."