PM meets with permanent secretaries ahead of special zones 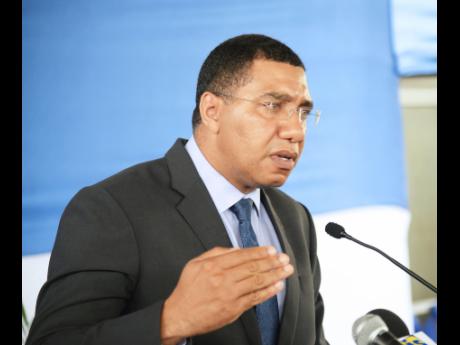 As the nation waits to see the declaration of the first of the zones of special operations, permanent secretaries and heads of government departments and agencies were on Monday called in to a meeting with Prime Minister Andrew Holness.

At the meeting, a release out of the Office of the Prime Minister (OPM) said Holness emphasised the necessity for an all-of-government approach to the requirements set out in the Zones of Special Operations Act that was signed into law on July 14. The OPM release said that the roles of the various ministries, departments and agencies (MDAs) in the implementation, particularly with respect to the social intervention component, were discussed.

"Prime Minister Holness gave an extensive address during the meeting held at the Office of the Prime Minister, where he stressed that the Government is treating national security as its priority," it said. "He indicated to the meeting that once a zone is declared the MDAs must make the needs of the zone their priority."

Holness reminded the meeting that zones would have a joint operational command between the Jamaica Constabulary Force and the Jamaica Defence Force, and that the social intervention committee would be established within five days of the zone being declared. "Critically, the Government must provide the social services once the area has been cleared and normalised so we can go in with the social services to rebuild a secure community," explained the prime minister.

He said that the Government and Cabinet were prepared to deal with priority procurement matters pertaining to the zones as a matter of urgency.