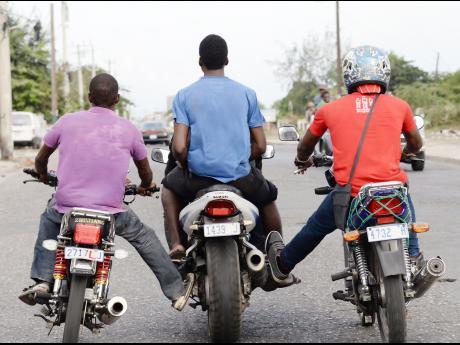 The National Road Safety Council (NRSC) wants the Government to place a special import tax on motorcycles to make the vehicles less affordable, as the country grapples with increased road fatalities involving motorcyclists.

The NRSC notes that since 2015 motorcyclists have overtaken pedestrians as the leading victims of road crashes.

The council argues that the ever increasing levels of disposable income of certain persons in Western Jamaica as well as the affordability of the small motorcycles has led to an increase in the use of such vehicles.

It notes that when they are seized by police, owners simply purchase another one instead of trying to reclaim the seized motorcycle.

The NRSC says it met last week with its chairman, Prime Minister Andrew Holness and proposed a tax on the importation of motorcycles to decrease the number of them on the roads.

It says this tax would go to the National Health Fund for allocation to projects which promote health and wellness.

It also wants the Government to reduce or eliminate the import tax on helmets and ensure that motorcycles cannot be sold without helmets.

NRSC also wants rules to ensure motorcyclists to have their licence plate numbers prominently displayed on their helmets and vests.

Additionally, it says the Jamaica Bureau of Standards should conduct a Regulatory Impact Assessment for the development of mandatory standards and technical regulations.