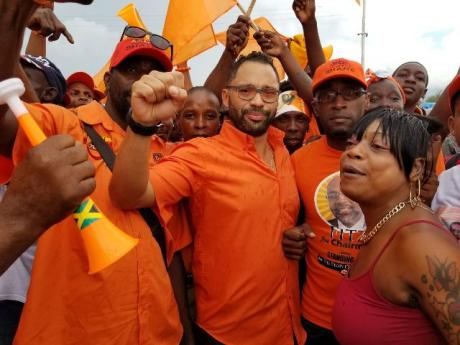 Vice president of the People's National Party (PNP), Dr Fenton Ferguson, says he will be in charge of the party's election machinery in the by-elections set for South East St Mary and losing is not an option.

Ferguson made the announcement as he told comrades at the National Arena a short while ago that today's party conference is a historic moment in its 79-year history.

According to the PNP vice-president, he will be putting on his six-star general hat to bring home the seat for the party.

The seat was held by PNP MP Dr Winston Green but was left vacant after his sudden death last month.

Another medical doctor, Dr Shane Alexis, has been selected to represent the PNP in the upcoming by-elections.

For Ferguson, this year's conference is happening at a crucial time when the party is transitioning.

"We meet at a critical time in the history of our great movement. We meet at a time when there is a time of transition if leadership... moving from Portia Lucretia Simpson Miller to - our former president and former prime minister of Jamaica - to Peter David Phillips," Ferguson told PNP supporters.

He mentioned that PNP Chairman Robert Pickersgill will also be leaving the post he has held for the past 25 years.

Fitz Jackson and Anthony Hylton are front-runners to replace Pickersgill next week at the party's National Executive Council meeting.

"A beg of all the Comrades to get all the pictures you can get, because this is an historic moment," Ferguson quipped.

Ferguson, a six-time vice president of the party, also told comrades that the party had moved back to its traditional 4-day conference.

He asserted that no PNP delegate could complain that there was no opportunity for them to participate in the conference.