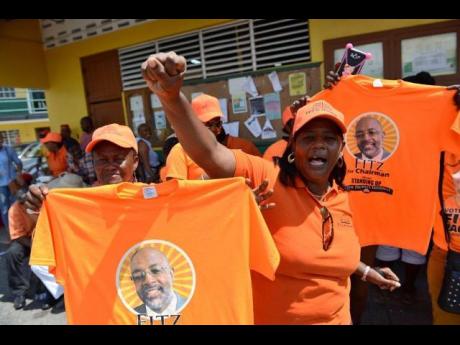 Ricardo Makyn
Supporters of Fitz Jackson celebrate after the results for the chairmanship of the People's National Party was announced at the St Mary's High School in St Mary today.

Fitz Jackson was just elected the new chairman of the People's National Party (PNP) by its National Executive Council.

He becomes the PNP's 6th chairman following the 25-year reign of Robert Pickersgill, who retired from the post.

Jackson, the Member of Parliament for South St Catherine, turned back the challenge of Anthony Hylton, who served as deputy chairman for 10 years up to the time of the election.

After the votes were counted at the St Mary's High School in St Mary, where the election took place, Jackson scored 187 versus Hylton's 79.

Jackson is considered a trusted ally of PNP President Dr Peter Phillips, and was one of his initial backers when Peter Bunting signalled his intention to challenge Phillips for the president's post earlier this year.

The chairmanship is the second highest post in the PNP.

In the meantime, Horace Dalley was elected the deputy chairman of the party.

The Member of Parliament for North Clarendon polled 151 votes to defeat Patricia Sutherland who scored 100 votes.