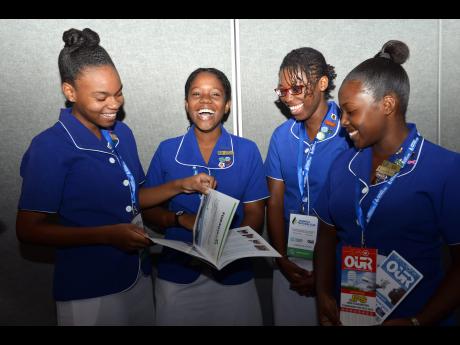 Enthused by the prospect of energy diversification, a crop of upper-sixth-formers from the Immaculate Conception High School are unanimous in their belief that Jamaica's inaugural Natural Gas Conference will not only shape their own development in the field but will also strengthen the struggling economy.

The only students present at the event, the youngsters took a collective interest in attending after discovering the details online.

With a US$275 tag for entry to the conference, the girls received sponsorship from their school as well as the Office of Utilities Regulation (OUR).

Eighteen-year-old Jhenelle Christie who is eyeing a career as a petroleum or chemical engineer stated that the conference was significant in further airing the benefits of natural gas.

"The conversion to liquified natural gas (LNG) won't only provide a cleaner environment by way of less carbon emissions, but it will also aid [to combat] climate change, which has been very topical."

Deputy Head Girl Kianna Freeman, 17, who aspires to be an energy researcher said that she attended mainly to better inform herself as to the future opportunities in the energy sector and other sectors which will be impacted by the emergence of LNG.

Geoscientist hopeful, Gabrielle Gayle, 18, argued: "I want to know how natural gas will help to diversify Jamaican's energy economy and help with the sustainable development goals. I would someday like to discover oil to the benefit of my country so I keep in tuned with all the developments in the sector, and this one is huge."

Her schoolmate, Sharmalee Wright, concluded: "Not only can the LNG industry grow the economy but it is positioned to aid social development greatly through the provision of jobs. Also, I've always wanted to become a pretroleum engineer so getting this exposure early can only aid me in transitioning into the profession."

Clarke: Energy mix to have profound impact on economy
Universities join forces to ease shortage of engineers
Cleaner Jamaica coming - Environmental preservation at the core of LNG use
Editors' Forum | 'JPS will have to adapt' - LNG gives local entities power to leave grid
Energy in Ja the LNG way