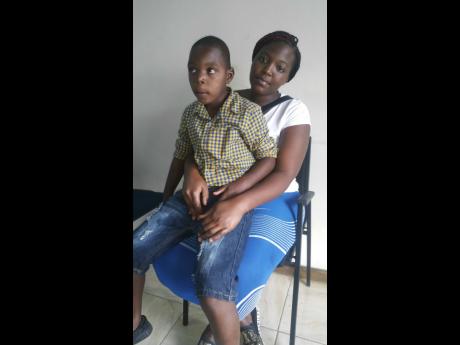 Life for Tasheika Williams has not been easy and everyday it seems as though she is failing miserably to adequately care for her sick eight-year-old son.

Every day she questions the episodes in her life, why they played out the way they did, and how she can possibly make it better.

Making a plea to Jamaica, she says, is possibly her last resort.

"My son, Daniel Wilson, was born with a hole in his heart. He did a surgery and after the surgery, they found out he had brain damage. The brain damage has caused him to have speech problems he only says one and two words. I have to bathe him, do everything for him, really and because of that, I am unable to work," said Williams.

The 24-year-old inrormed that Daniel is able to go to school, but she cannot afford the school of special needs.

"Because I am out of a job, I cannot afford to send him. I would need to charter a taxi from where I live to school every day, and I really don't have the money. There is another school that is closer to me, but it's private and much more expensive."

As a result of her non-existent income, Williams revealed that her son has also fallen off all his clinics.

"I used to visit the clinics sometimes three to four times per week or per month. He was on heart clinic, clinic for the brain, ears, nose and throat (ENT) clinic, but I couldn't afford the travel and he fell off about a year ago. I am still unsure about what is going on in his brain and we are way behind with some of his tests," Williams explained.

Daniel, who operates at the level of a three-year-old, is in need of constant attention and the supervision of an adult. This makes it hard for Williams, a single mother, to get and keep a job.

"I have tried to work it out, I used to work as a cashier at a supermarket, then I left and worked as a store clerk. I even use to raise chicken at one point, but I really don't have anybody to keep my son and so I always end up having to stay home with him."

She continued, "He is not the easiest to deal with, because of his condition: he is stubborn and likes having his own way. Sometimes people scorn him, it's just very hard at times."

Williams said if she gets a job and gets her son into school, it would mean the world to her.

"If I could get him into school, and get a job with times that are flexible enough to accommodate him when he leaves school or be able to afford a facility that can keep him until I leave work, I would be grateful. I am just pleading to anyone reading this, if you can help me out with him, please help."