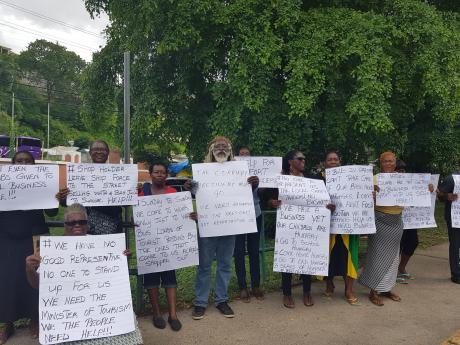 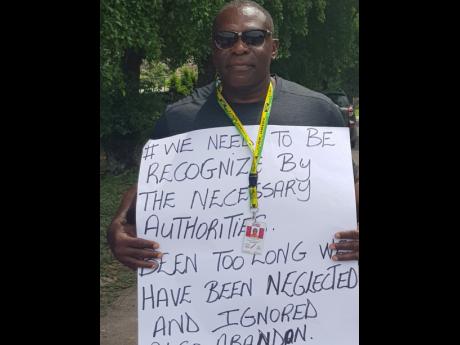 One craft trader has abandoned the Old Fort Craft Market to sell bag juice and water on the streets of Montego Bay, another stays home and raises animals, as what used to be a lucrative business turns sour.

The more than 150 vendors who operate at the facility owned by the St James Municipal Council are hurting as visitors to the island shy away from the facility.

"Ship passengers visiting the market are a thing of the past, and tourists in the hotels are shopped out by the time they get here," said one vendor, who was among a group staging a peaceful protest outside the gates of the market last Tuesday.

They blame their situation on taxi drivers and tour operators, who they allege have been bought out by big merchants in the city, and the unfair practice by a senior member of their group who they say has abused the privilege given to executive members of craft associations to access the cruise ship ports.

While they protested last Tuesday, two ships were docked at the Montego Freeport Pier, with an average of 8,000 passengers each, yet not even one tourist visited their facility. Instead, the tour buses packed with passengers could be seen at the Blue Diamond Shopping Centre, City Centre Building, the Hip Strip, and Whitter Village.

"The drivers are getting good money from the merchants, and expect big money from us as well, but we can't afford it," said one of the founders of the Old Fort Craft Traders Association, Brian McNish.

After 30 years in the market, McNish said there was a time when they were able to survive; however, in the last two years there has hardly been any profit coming in.

He said access to eight stalls was made available at the cruise ship pier, and the vendors are rotated weekly with the Harbour Street Craft market; however, an executive member takes four of the shops for herself and gives four to others.

"She goes to the cruise ship every week that we are entitled to access the port, and if we talk about it we are marginalised," alleged Bee Chung, one of the protesting traders.

His comments were supported by other protesters carrying signs alleging corruption on the part of the executive member whose name is being withheld.

Efforts to get a comment from the executive member, were unsuccessful last week as she was said to be overseas.

Beverly Mullings, an elderly woman who operates a shop in the craft market said her situation has reached the point where she now walks from Mount Salem to the Old Fort because she cannot afford to take a taxi.

The craft traders argued that complaints of tourist harassment will not continue for some time because of the few they receive.

"We are hungry for business, and when you do send us business, you send 10 tourists to a market of 156 shops? They are bound to get harassed," lamented Andrea Crooks.

The traders, who are licensed by the Jamaica Tourist Board and the Tourism Product Development Company, have undergone the Team Jamaica training, but say they have not had any renewal since June and are now being asked to sign five-year contracts for lands they have been operating on for 30 years.

"We are calling on the minister of tourism and all the respective players to rescue us from our plight," they said.