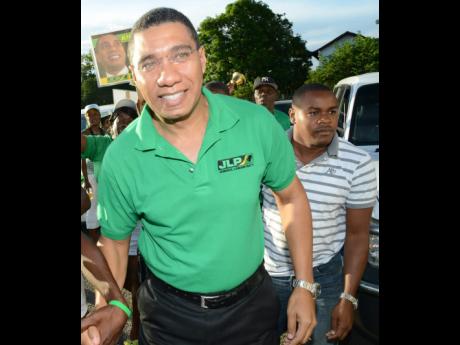 Prime Andrew Holness has declared that no power can stop the $600 million road improvement project on the Junction road in St Mary.

“There is no power in this country that can stop that road from going on,” Holness declared last night as he took on critics over the controversial road project scheduled to start this month on the Junction Road in St Mary.

Speaking at a Jamaica Labour Party (JLP) meeting in the party’s stronghold of Gibbs Hill, St Mary, Holness said the people of South East St Mary have been suffering too long, and the Government will not back down from executing the project because of a pending by-election.

The prime minister insisted that the project was always in pipeline, pointing out that it was a line item in the budget for this fiscal year.

“This argument about not doing the road because of a by-election is pure hypocrisy. You call it bad mind, I don’t business with bad mind, because I only have a good mind for the people of St Mary,” Holness said to cheering supporters.

He insisted that systems were in place to protect against wrongdoing, seemingly referring to the Office of the Contractor General.

“We run a government that is able to fix a road without that road being used as an election tool. We have systems in place to ensure that there is no leakage… that who gets the work – no matter whether they are JLP or PNP (People’s National Party) [supporters],” Holness said.

The political temperature in the North Eastern parish has been on the rise in recent weeks, triggered by the death of former Member of Parliament for South East St Mary Dr Winston Green and the subsequent announcement of a by-election for October 30.