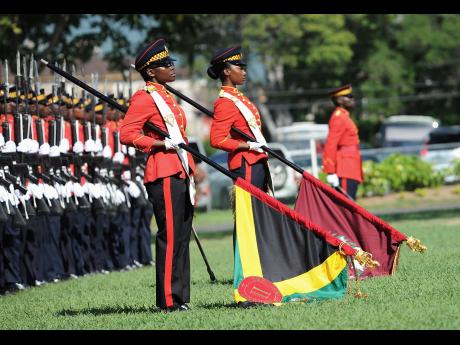 Ricardo Makyn
Members of the Jamaica Defence Force carry the Queen's Colours and the Regimental Colours respectively at the Ceremony of Investiture and presentation of National Honours and Awards last year.

Tomorrow, a total of 171 persons will receive national awards at King’s House in St Andrew.

The list of awardees includes musical icon Neville O’Reilly Livingstone, popularly known as ‘Bunny Wailer’, who is to be conferred with the Order of Merit.

Bunny Wailer is the only surviving member of the iconic group Bob Marley and the Wailers.

Last month, Culture Minister Olivia Grange disclosed that Tremayne Brown, the rescuer of a drowning boy in Trench Town, Kingston will also receive a national award for his bravery.

Grange had said then that Prime Minister Andrew Holness suggested that Brown be given a national award for risking his own life to save 12-year-old Renaldo Reynolds, a student of Jones Town Primary.

It is anticipated that Brown could be awarded the Badge of Honour for Gallantry.

Under the National Honours and Awards Act of 1969, formal recognition of service to Jamaica and its citizens may be given by the conferment of the six Orders of the Societies of Honour, and the two national awards.

They are as follows:  Order of National Hero; Order of the Nation (ON); Order of Excellence (OE); Order of Merit (OM); Order of Jamaica (OJ); Order of Distinction, Commander Class (CD) and Officer Class (OD); and by the award of the Badge of Honour and the Medal of Honour.

The Orders are the highest of the national awards, and recognise merit in terms of achievement and service, while Decorations and Awards are used to recognise gallantry, meritorious, and long and faithful service to the nation.