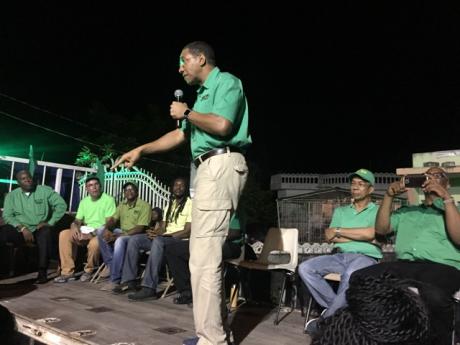 Prime Minister Andrew Holness has disclosed that he is seeking legal advice on the citizenship controversy which has rocked the Opposition People’s National Party (PNP), signalling his willingness to have national dialogue on the question of who qualifies to sit in the Parliament.

Holness, on the campaign trail in South East St Mary last evening, placed the PNP candidate for the upcoming by-election in the constituency Dr Shane Alexis is the firing line, fuelling the controversy over last week’s revelation that he was not a Jamaican citizen.

“We now have a situation that we now have to contemplate… and I have been doing the research, I haven’t completed it yet, but I don’t know of a situation where the possibility – God forbid – that we could have someone sitting in Parliament representing you the people who is not a Jamaican citizen,” Holness said, adding that the records are being checked for verification.

“It would certainly be a challenge if it were the case that someone who is not a Jamaican citizen were to be sitting in our Parliament,” Holness further said.

The prime minister told supporters that many, for several reasons, have come to Jamaica and have applied for citizenship which he described as the “ultimate symbolic of respect for the nation that they intend to live in”.

Holness, however, said his immediate focus will be on ensuring that Dr Norman Dunn gets elected for the constituency in the October 30 by-election.

At the same time, Daryl Vaz, the JLP firebrand member of parliament who became the party’s spokesman of the citizenship saga involving Alexis, urged Labourites not to be distracted by the controversy.

After the public revelation that Alexis was not a Jamaican, the PNP in a media release said he would be moving immediately to apply for citizenship.