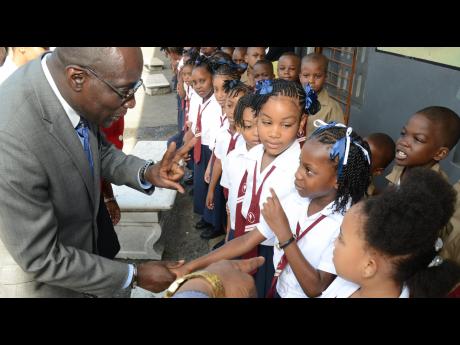 Less than eight weeks after they returned to school decked out in clean uniforms, shiny shoes, and new book bags, approximately 10 per cent of the students, mainly boys, in schools in some of the tough inner-city communities in the Corporate Area have already dropped out.

No money, poor spending habits by some parents, inclement weather, and pervasive gang violence are among the factors being blamed for some of the dropouts.

"One of the main reasons, some parents say, is that the funds are low, there is a shortage of cash. Some of them really come out to make a grand hooray for the first week, and then after that, they go back to reality," said a grade-three teacher from St Jude's Primary School.

"What they do is misuse finance. They splash for the summer, buy the dearest shoes and school uniform for back to school Clarks shoes and $6,000 bags to go school - and they are not economising.

"So when they come for the first week, is scrape them really scrape to bring them for registration and orientation," added the teacher who asked not to be named.

Juliet Campbell-McPherson, principal at St Michael's Primary School in downtown Kingston, said her institution has also seen a fall-off in the number of students attending since September.

"In most cases, it's not very significant, maybe about an eight to 10 per cent reduction in the numbers compared to those who turn out for back to school in September. Some of the parents will tell us that they just can't find the money," said Campbell-McPherson.

"So you will see them at the start, but you realise they are not around after the first couple of weeks. But many of our students are on the PATH programme and we have been telling parents to send them out even if they don't have the lunch money," continued Campbell-McPherson.

PATH, the Programme of Advancement Through Health and Education, is a conditional cash transfer scheme funded by the Government which offers school fees, lunch, and other contributions to approximately 165,000 students each month.

Campbell-McPherson bemoaned the impact of lost school days on the children who are missing classes, and president of the National Parent-Teacher Association of Jamaica, Everton Hannam, charged that many times, the PATH payments are not put to good use by parents.

"Some parents, especially those whose children are on PATH, spend foolishly with the grants they receive. Instead of using it for the purpose, they spend on their personal needs and the child doesn't benefit," said Hannam.

He told our news team of a case where a parent purchased five uniforms for her child to return to school in September, but the child is now out of school as the mother said she cannot afford to send her.

"The absence could also be because of the rains that the country has been having. The flooding on the roads is really bad and it is not safe for children to manoeuvre the water," argued Hannam.

He added that the absence of parents from some households and violence in some communities may be other factors that contribute to student absenteeism.