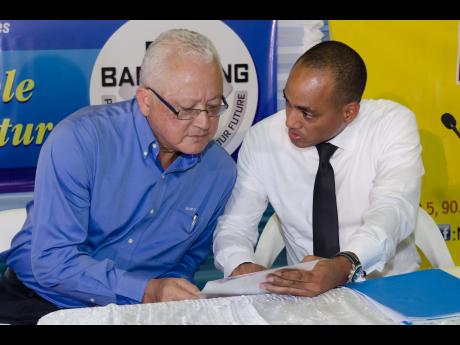 Attorney-at-law Peter Champagnie is warning that unless the police improve their investigation of crimes, guilty persons will continue to take their chances with the courts while ignoring the opportunity to accept a plea deal from prosecutors.

Minister of Justice Delroy Chuck is expecting plea bargaining to become a game changer for the criminal justice system as more and more persons offer a guilty plea in exchange for a lighter sentence.

But Champagnie is not convinced.

"The basis on which anybody is going to plead guilty will depend to a large extent on the quality of the evidence they have on accused persons. It can't be left upon one's own conscience.

"We need to accept that the basis upon which one is going to consider a guilty plea would be the strength of the prosecution's case or the evidence against the person. It therefore means that the evidence should measure up to a standard, whereby if it is tested in a trial, the likelihood is that the person will be found guilty," Champagnie told The Sunday Gleaner.

He argued that the police must be provided with greater resources to help them investigate crimes as they are now handicapped by the lack of critical tools.

"Guilty pleas can only happen if the means by which the police do their investigations and gather results are up to date, accurate, and can withstand cross-examination by a lawyer.

"In circumstances where you have independent evidence other than the police just saying so, it will go a far way in terms of the Crown's case. Pretty much like when you are caught on cameras in public spaces.

"Taking a statement for instance, from an eyewitness, should be taken at the most reasonable opportunity (as) memories will fade for whatever reason. The quality of the statement that is then taken falls short of what it ought to be," added Champagnie.

He argued that police investigators are further hampered by the shortage of equipment to conduct forensic tests.

"There is only one laboratory in terms of forensics in the island. It serves the entire island. Cases in Montego Bay which require samples to be tested for DNA, and also where you can test a firearm to see if it was recently fired, it is just one lab, and that can't be the case.

"You can't expect that in those circumstances, where cases are brought before the court and found wanting in terms of the level of investigation and material collected, that persons will plead guilty," said Champagnie.

He argued that plea bargaining could ease some of the pressures of the country's overburdened justice system, and encouraged persons who have been accused of crimes, and know they are guilty, to take advantage of the plea deals offered by prosecutors.