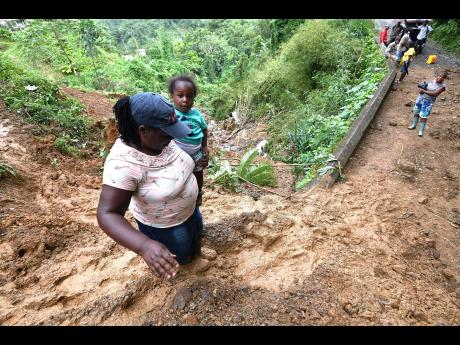 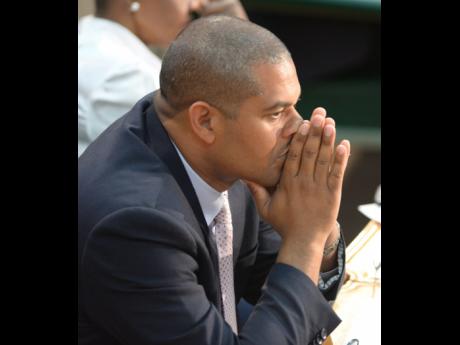 Elisia Bailey in Norwich Heights, eastern Portland, painted a frightening picture of rising floodwaters in her community during recent heavy rains, while many families were trapped at home with no clear way out.

"Water come right up on the light post and covered large sections of the community. We have no drinking water, no proper access to our community, and we have no way of fixing this drainage problem. We don't know what to do. We need help," Bailey told Opposition Leader Dr Peter Phillips as he toured the flood-ravaged sections of the parish last Thursday.

Bailey's lament is not unusual for thousands of Jamaicans in several flood-prone communities islandwide.

Many, like Bailey, live in formal communities, and are not spared the devastation of the deluge.

Similar cries for help have come from communities in Clarendon, Trelawny, St Ann, St James, St Mary, and St Thomas in recent times. Areas that were not previously named as flood-prone have now joined the long and growing list of vulnerable communities.

According to Opposition Spokesman on Transport and Works Mikael Phillips, different administrations, since Independence, have spent multi-millions of tax dollars on flood repairs after storms and hurricanes, but as the advent of global warming advances, the need for a wide-ranging, overarching programme to encompass and provide for the possibilities of extreme flooding has become necessary, urgent and critical.

He noted that the last People's National Party (PNP) administration instituted a Ministry of Water, Land, Environment and Climate Change, which was intended to set the country on a path of readiness for the expected onslaught that has now arrived.

Phillips said that the Government must now develop and implement a comprehensive flood-mitigation programme for the entire island to ease the suffering and economic dislocation caused by the frequent flood rains.

He argued that with the effects of climate change on Jamaica's weather pattern in recent times, the Government must embark on a new programme to modernise and improve the country's ability to handle the new type of rainfall patterns.

"It has been more than 50 years since the last major flood-mitigation investment, and surely, the country cannot not afford to postpone the development and implementation of a new plan to protect the country's expensive and vital infrastructure," said Phillips.

He pointed out that the level of residential and infrastructural damage caused by last week's flood rains in St Ann, St Mary, and Portland is extremely high, and the country will now be faced with high repair bills for roads and bridges.

"Householders, students, transport providers and the general economies of the deep rural parts suffer immensely on account of floods and dislocation. The majority of rural folk are affected in significant ways when waters rise and communities are inundated," said Phillips.

"Agriculture, accounts for some 6.8 per cent of the nation's Gross Domestic Product, but is the occupation of the largest percentile of rural folk, takes a massive hit, and time to recover," added Phillips.

He charged that the damage to infrastructure in some communities is even worse than anticipated because of poor or inadequate work done on National Works Agency (NWA) and municipal council projects.

According to Phillips, the bridge in Dumbarton, St Ann, was a prime example of a recently constructed box culvert which did not benefit from river training support to protect the culvert, resulting in the structural damage to both the roadway and culvert.

The opposition spokesman added that the infrastructure damage caused by last May's flood rains had received no attention, and this worsened the plight of citizens to access their homes and farms.

He said the Government must make the flood-mitigation programme an item of priority for the Cabinet and take immediate steps to allocate additional resources to the affected parishes.

"The PNP is calling for a bipartisan approach to the environmental emergency that the impact of frequent heavy rainfall is having across the island," said Philips.