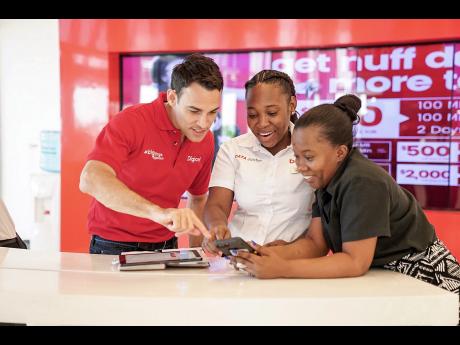 Hit by a barrage of customer complaints and expressions of concern from the Office of Utilities Regulation (OUR) and the watchdog Consumer Affairs Commission (CAC) when he took over as the new chief executive officer of Digicel Jamaica last September, Justin Morin embarked on a mission.

He was determined to restore Digicel's reputation as a caring, customer-friendly telecommunications provider, and is now confident that, with his team, they have gone a far way to achieving that.

"I was disappointed and I took it personally, and when I talk about listening to the customers and changing, this is exactly what I have set about to do, and I am leading the charge on that with a great team that I have here," Morin told The Sunday Gleaner.

"We are making a whole bunch of changes and we are calling it our 'Destination Data Drive', and it is really all about addressing those complaints and bringing great value to our customers so that they can feel comfortable buying and using our data products," added Morin.

Under Destination Data Drive, Digicel has responded to one of the major complaints of its customers by removing the automatic overages so that customers are asked before being charged for out-of-bundle data.

It has also simplified plans, making them easy to understand, introduced new, value-packed bundles with extra megabytes (MB) and talk minutes and introduced unlimited rollover data so that customers get to keep and use what they've paid for.

The company has also improved the My Digicel app so that users can easily track their usage and manage their account while reducing the out-of-bundle data rate by 60 per cent from $50 to $20 per MB.

"We have heard what our customers had to say and that's not Digicel. Ten years, 15 years ago, we were really a company that put customers at the centre and revolutionised mobile service across Jamaica, revolutionised customer care, and that is still in our DNA.

"So we are concerned about that perception that customers have and we are doing something about it because we still remain that customer-centric company, and I hope all these changes that we are bringing in, customers will start to see that again," added Morin.

The Digicel CEO scoffed at claims that its foray into other sections of the telecommunications sector, including cable and business solutions, has caused it to pay less attention to its core mobile users.

"We still have a core team here focused on our mobile customers and we still remain very focused on them as they are still a huge part of our business. There are separate teams for each area but it is the same Digicel across all," said Morin.

He said since some of the changes have been introduced Digicel has already seen a reduction in complaints, and the OUR has acknowledged that.

In a January 17 release, the OUR reported a sharp decline in complaints related to data charges/credit depletion from Digicel customers, with only one complaint received in the October to December 2017 quarter.

But the regulator said given that the full implementation of the mitigation measures was done at the end of last year, it would conduct a further assessment at the end of March this year.