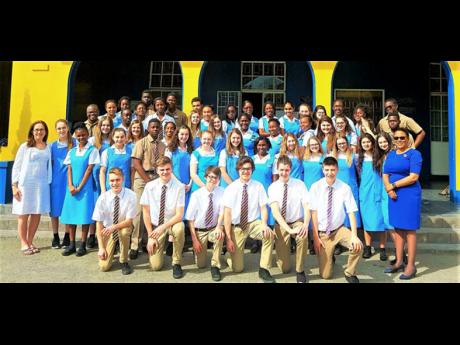 Contributed
A group of 25 French-Canadian students from Polyvalente La Semere in Quebec who have been in the island attending classes at Ardenne High School.

A group of 25 French-Canadian high school students from Polyvalente La Samere in Quebec are scheduled to leave the island today after spending three weeks attending classes at Ardenne High School in St Andrew.

The group, accompanied by three chaperones, arrived earlier this month, staying with families of Ardenne students in the Kingston and St Andrew area. The visit of the Canadian students was partly funded by grants from the Canadian education ministry.

The students are here as part of a 16-year-old ongoing relationship with Jamaica that has taken them, over the years, to Buff Bay High School in Portland, where the programme first started, and later, to Ardenne High School in Kingston.

"The programme started at Buff Bay High while I was there as principal", Nadine Molloy pointed out. "When I moved to Ardenne, I proposed that we share the programme and the principals agreed."

While on the island, the students participated in normal school activities, wearing the Ardenne uniform, and they also had an opportunity to see the beautiful countryside and soak up some of the Jamaican culture and lifestyle.

"We are thrilled to be here once again, and our students look forward every year to the joys of visiting your enchanting and diverse island," Danielle Beliveau, principal of Polyvalente La Samere, told The Gleaner in French.

The student itinerary included a visit to King's House, a bus tour of Kingston, and an extreme adventure trip to Mystic Mountain in St Ann.

Earlier this year, a group of students studying French at Ardenne made a similar winter trip to Polyvalente La Samere in Quebec, Canada, for the fourth year, and they stayed with the families of the overseas students who are now visiting.