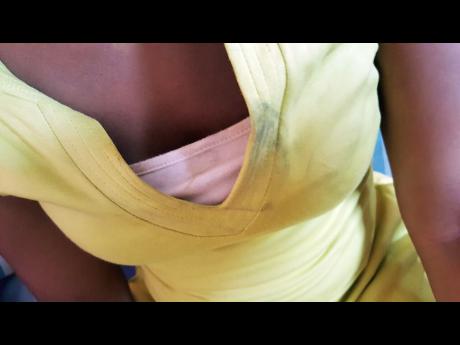 Contributed
A high school teacher shows that state of her clothes after she was allegedly attacked and beaten by a female student. 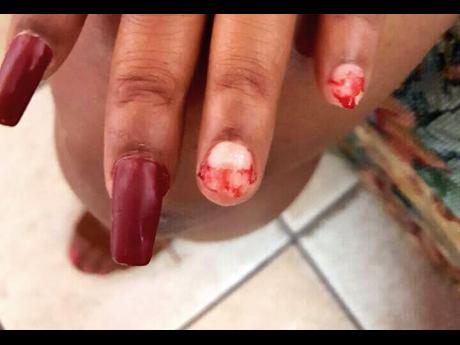 Contributed
The damaged nails of a teacher who alleges she was attacked and beaten by a student.
1
2

Teachers at a prominent high school in Portmore, St Catherine, were in a huff last week, after one of their colleagues was arrested following an altercation with an eighth-grade student more than a month ago.

According to the arrested teacher, whose name is being withheld, she was asked to visit the Greater Portmore Police Station last Monday and assumed the cops wanted to follow up on a report she had made against a student who had attacked and beaten her in May.

But when she turned up at the station, she was told that she was under arrest, and that she would have to contact a relative to post bail.

"The policeman who called me said to 'come to the station because we want to talk to you', knowing that they wanted to arrest me. Had I known that they were going to charge me, there was enough time for me to get somebody with the relevant documents to come to the station," the teacher told The Sunday Gleaner.

She said that she spent hours in custody searching for a relative with the requisite documents to bail her.

"I am not a criminal. I wasn't going to run ... . Then and there, I was told that I was not allowed to leave. I was referred to as the prisoner by a female officer, and they told me I could not post bail on my behalf," she said.

According to the teacher, the arresting officer told her that when they called the child's mother to inform her that charges were being laid against her daughter, the mother made a counter-report against her.

The teacher, who is out on bail, last week shared photographs of her fingers from which she said three of her nails were ripped by the student who slammed a door on her hand, bit and kicked her repeatedly because she refused to let the child into the classroom.

Last week, school authorities declined to speak on the matter, but several teachers, who spoke with our news team, were enraged over the arrest of their colleague.

They argued that it was unfair for the cops to charge their colleague, who was brutally beaten by the teenage girl and later suspended from classes while an internal investigation was done.

The student was also suspended during the probe and reportedly asked not to return to the school after the investigation.

The teachers argued that it was the school's decision to expel the child that prompted the mother to file allegations against their colleague, and called for more protection from the Ministry of Education.

"There needs to be a zero-tolerance approach to students who physically attack a teacher.

"For you to attack a teacher, bite her, kick her ... that's a vicious attack. That needs to carry a heavy penalty. It shouldn't go through any 14-day-long investigation, the teacher's injuries were quite obvious," said one teacher.

"Everybody had an overwhelming feeling of having lost control and authority at the school. Most of us were very upset about the incident. The ministry really doesn't understand what we teachers are facing on the ground," argued another teacher.