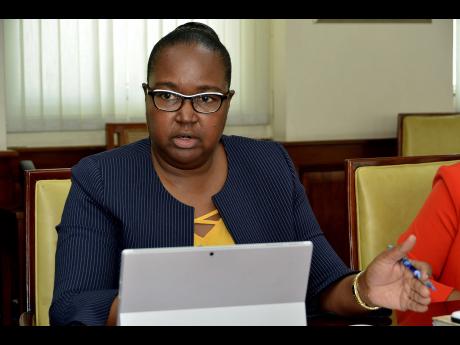 The Ministry of Education (MOE) is adamant that sufficient resources have been provided to the island's state-operated primary schools to ensure that they can make a smooth shift from the Grade Six Achievement Test (GSAT) to the Primary Exit Profile (PEP).

Next year will see the first group of students sitting the PEP, but some educators and several parents have expressed concern that the schools are not ready for the change, which will involve a series of assessments in three components, a performance task, an ability test and a curriculum-based test.

But Chief Education Officer Dr Grace McLean, last week, sought to allay the fears as she told a Gleaner Editors' Forum that every effort is being made to ensure that the first staging of the PEP flow smoothly.

"We are very comfortable with the resources that we have been providing. I feel the schools are happy," McLean told Gleaner editors and reporters.

She said that at two recent back-to-school meetings in Kingston and Montego Bay, St James, educators gave positive feedback regarding the support they have received from the ministry.

"The ministry has critically analysed the curriculum and made a determination as to what must be provided to for each institution," said McLean.

"In addition, we have procured and started the distribution of specific resource materials that speak to differentiating instructions, critical thinking skills, ways of collaborating. We have also increased the primary grant from $850 to $2,500 per student. So there is more funding at the primary level," added McLean.

She noted that in addition to providing primary schools with curriculum and other grants since 2016, the ministry has also provided close to $150 million worth of computers and computer-enabled support for primary schools.

According to McLean, the ministry has also been receiving support through the e-Learning programme, and teachers are also being urged to rely on their natural resources as part of efforts to get children prepared for PEP.

"If you have trees and plants and flowers within the environment, as we do in most of our primary schools, especially those in the rural areas, we don't expect that you are going to be buying seeds and now planting those seeds ... you have the environment around you," said McLean.

What are the components of PEP?

PEP consists of three key components, a Performance Task, an Ability Test and a Curriculum Based Test:

The Performance Task (PT) consists of real world scenarios that will require students to apply their knowledge and skills from the following subject areas: Mathematics, Science, Language Arts, and Social Studies. The PT will be administered in grades 4, 5 and 6. It will be administered within the student's classroom by their teacher.

The Curriculum Based Test (CBT) will be curriculum based and will assess GRADE SIX CONTENT ONLY, in the areas of Mathematics, Science, Social Studies and Language Arts. This test will consist of multiple choice items along with other item types. The CBT will be administered close to the end of Grade six.