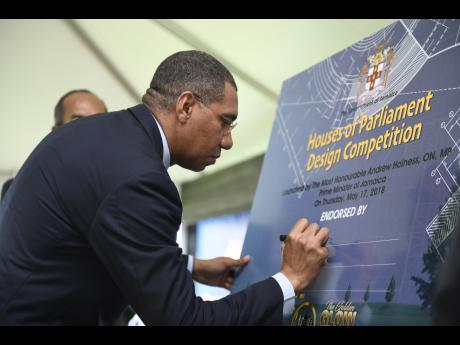 Gladstone Taylor
In this May 2018 photo, Prime Minister Andrew Holness signs the unveiled poster for the Houses of Parliament Design Competition.

Faced with continued opposition to the proposal to create the Government Oval, including the national parliament building inside National Heroes Park, the Urban Development Corporation (UDC) has tapped the Social Development Commission (SDC) to carry out community needs assessments, public discussions and consultations towards its feasibility.

According to the Office of the Prime Minister (OPM), the UDC's mandate is to ensure that social, community, environmental and infrastructural interests are included in all phases of the development process.

"The UDC continues to work closely with local communities to ensure that responsible and coordinated transition plans are in place before any finalisation and execution of its development plans," said the OPM, as it noted that the vision for the proposed Government Oval is slated to take approximately eight years and would be approached in three broad phases.

The OPM said the most recent concept master plan, led by the UDC, outlining ideas for the redevelopment of the National Heroes Park and the wider downtown Kingston is currently under review by the Government, with the funding for the proposed ideas yet to be approved by Cabinet.

"To date, the Houses of Parliament Design Competition is the only element of the proposed plans for the redevelopment of a section of the park, which will form part of the Government Oval Campus, has been advanced.

"As the focal point of the wider redevelopment, the competition has engaged our Jamaican architects operating locally and in the diaspora, and encouraged public inclusion for reimagining our parliament building, and a new Heroes Circle of the future," said the OPM.