Clarke: Energy mix to have profound impact on economy 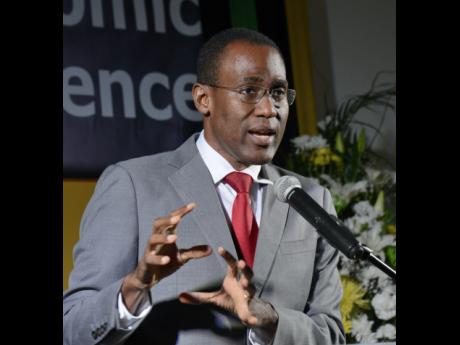 Finance Minister Dr Nigel Clarke has expressed strong optimism about the Jamaican economy as he looks forward to structural changes anticipated in the country's energy sector.

According to Clarke, there is a revolution taking place in the energy space that will have a profound impact on the economy.

"There is a 190-megawatt LNG (liquefied natural gas) fuel plant that is going to come on stream next year. Once that comes on stream, there will be a decommissioning of an almost equivalent of HFO (heavy fuel oil) generating capacity.

"In one shot, we are switching 190 [megawatt] from HFO to LNG," Clarke charged, pointing out that the base load capacity for Jamaica is approximately 600 megawatts Clarke, who was speaking at a meeting of the Kiwanis Club of North St Andrew, also mentioned that by 2020, an additional 84-megawatt LNG plant will add to the diversification of the energy sector.

"It will have a positive impact on our balance of payments, in addition to the fact that we are likely to see energy cheaper as a result of this mix. So, it's a huge structural reform that is taking place, and it's going unnoticed," Clarke said.

The finance minister did not mention how much of an impact the switching-over would have on the Government's tax revenues, especially since he anticipates lower demand for HFO.

At present, there is an average 6.5 per cent special consumption tax on HFO.