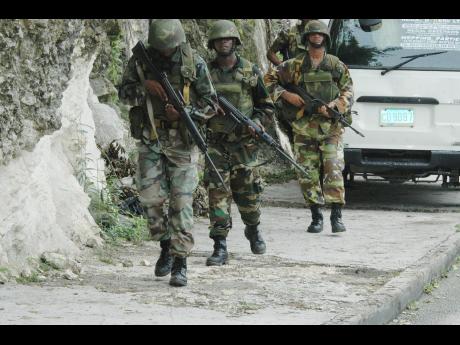 Some residents of Cambridge, St James, are questioning the commitment of the security forces in tracking down and apprehending the remnants of the notorious Ratty Gang, who were said to be cornered in bushes in the Cambridge-Retrieve area two weeks ago.

"You mean to tell me that we have well-trained police and soldiers with all the resources of the State, and they can't capture these untrained boys?" asked a resident, who called The Gleaner by telephone to register her disgust.

"We are in constant fear because we don't know when these men will strike," continued the resident. "They rob us, steal our animals, and just walk around with the big guns like they are a law unto themselves."

In a recent STAR story, a member of the Jamaica Defence Force (JDF), who asked not to be identified, said that the gang, which was partially dismantled at the start of the imposition of the state of public emergency in the parish, had been trapped in bushes on the Retrieve-Cambridge border.

"They are now cornered in the bushes, and we are blocking all the known escape routes," the soldier said. "We will be bringing in additional resources because our main focus at this time is to flush them out."

However, except for helicopters flying over the area and one exchange of gunfire between the gangsters and a joint police-military team, nothing of significance has happened in the past two weeks.

On Thursday, September 27, the gangsters, in a very daring act, ambushed a police-military team in broad daylight in the Richmond Hill section of Cambridge, shooting two soldiers before fleeing into the bushes.

In the aftermath of the shooting, Major Basil Jarrett, the civil-military cooperation officer at the JDF, said that they would pursue the gangsters until they were caught.