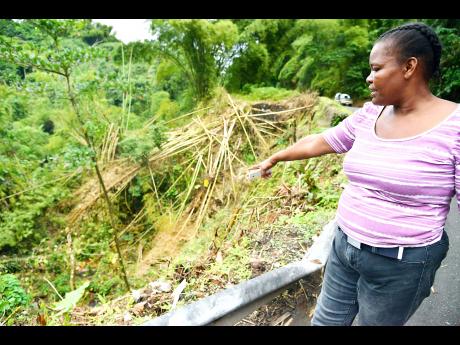 Kenyon Hemans
Novelette Fuller-Francis points to the ravine in the Rio Grande Valley, where a market truck over turned 10 years ago, leaving 14 persons dead.

The weekly tradition of the Friday night journey from Portland to Coronation Market in Kingston was a decades-long practice and one usually anticipated by long-time higgler, Novelette Fuller-Francis.

But on December 19, 2008, the then 43-year-old Fuller-Francis was apprehensive about making the trip. A feeling she said stemmed from a premonition of death she had days earlier.

As fate would have it, Fuller-Francis would be involved in one of the deadliest road accidents in modern Jamaica, as the market truck transporting her and 20 others plunged into a ravine at Dam Bridge in the Rio Grande Valley in Portland.

Although she cheated death on that eerie night 10 years ago, the mother of four did not escape unscathed.

On the eve of the 10th anniversary of the tragedy, Fuller-Francis told The Gleaner that her livelihood died as a result of the injuries she sustained and the mental scars that linger to this day.

"If I had followed my instincts that night, everything would be as it should," declared Fuller-Francis.

"I visioned going to this place - this road - with two other persons and seeing dead bodies just a drop pon the ground. They were suffocating people with plastic bags. So, I told my daddy about it and he said, 'This is not a good sign. Do not go to market'. But me play stiff-neck, and go a market, but on the way I kept on praying because I just felt that something was going to happen," added Fuller-Francis. .

Conscious after the crash, Fuller-Francis, one of only seven survivors, said she ended up in the river beneath the roadway pinned down by a bag of dasheen estimated to weigh 200 pounds.

According to Fuller-Francis, she was stuck for nearly two hours before help arrived. Among the helpers was a group of 'scavengers' who robbed the dead and injured of valuables.

The 53-year-old Anchovy resident, who lost three cousins in the accident, has not been back to Coronation Market since then.

Ten years later, she said she only survived through her faith in God, as her only source of income is washing for persons occasionally.

"Being a higgler was all I knew. It's what I love, but I can't do that anymore, because whenever I lift load, I feel pain in my chest because tissues did tear. So, the doctor advised me not to lift any weight, and if I go to the market I will have to lift my load," said Fuller-Francis.

"Up till now, going on the road, if I see the trucks coming with load, I catch my 'fraid. I don't sleep well since that night. I have a daughter going nursing school and I can't even help her and that really bothers me. Only God knows how I'm surviving. I wish I hadn't gone on that truck the night," Fuller-Francis added.