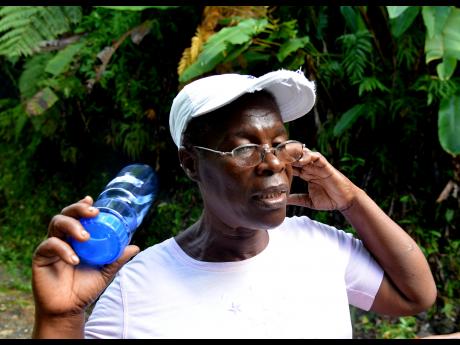 Kenyon Hemans
Joyce Whyte, who survied with minor injuries, lost her 20-year-old Faston Telfer in the crash in the Rio Grande Valley in Portland 10 years ago today.

For the last nine years, Joyce Whyte has refused to leave her house on December 19.

That's the day she survived a horrific accident that claimed the life of her son in the Rio Grande Valley in Portland.

But this year, being the 10th anniversary of the crash, she is willing to make an exception and attend fasting at her church.

That ill-fated Friday night, Whyte, a mother of nine, and her son, 20-year-old Faston Telfer, boarded the truck headed to Coronation Market in downtown Kingston like they had on numerous occasions before.

"He was sitting at the back of the truck pon one of the seats and me did deh a the left side. Me just feel when the truck make a rock and me hear him say, 'A wah this?' and me say to him, 'Me nuh know a wah this tonight, but hold on.' Me hold on till the truck go right down," Whyte told The Gleaner as she recounted the tragedy.

The truck ended up at the bottom of a ravine and Whyte was trapped under the vehicle, with somebody's leg across her stomach. She said she started calling for her son but got no reply.

"Me say, 'Lord, have mercy! A wah this? Look how me say me never did a go town this week, and look wah catch me'," said Whyte.

Surrounded by dead bodies, she continued calling for her son, and even today she is still not sure how she managed to get from under the rubble. The ravine was dark, and unsure how to get out or avoid water, she waited till she saw persons with lights coming to assist the victims and made her way back to the road.

Whyte said when she was taken to the hospital, she was treated for a swollen eye, and torn tissues in her leg and chest.

Fourteen of the persons who were on the truck did not make it. They were eventually taken to hospital the next morning and that is when she knew her son was dead.

According to Whyte, she was only able to identify him by a unique mark on one of his toes.

"Me son neck did break and him front teeth them did lick out. Me couldn't even did know say a him because him all did look black," said Whyte.

While her injuries were minor, the ordeal affected the entire family. She said she later found out that it was her partner who helped to lift his son out of the ravine, and what he saw caused him to collapse at the scene, knowing the body he held was that of his first child.

Whyte still survives on farming, though not on a large scale. And her partner is sick and unable to assist like he did before. She no longer visits Coronation Market.

"Me no go town. Me can't take it. When me hear the truck them blow, it come een like it give me a shock. Me can't take the long driving to go town. Sometimes me go Port Antonio, me don't even make anything, but me give thanks.

"If I didn't have the accident, my life would be much, much better, because when me used to go market, me carry a lot of load and me did able fi inna three or four pardner and me can't do them something deh right now," said Whyte.

After the accident, Whyte benefited from a two-bedroom house that was donated to her family in her community of Cornwall Barracks.

She, however, wished the promise that was given to assist the children of victims with their education was upheld.

"Sometimes me cry when me look and see me children them and me no see Faston. You see like on the 19th, me no come outa house, me fraid to drive on that day; sometimes me just bawl fi the whole day," said Whyte.