It was not love at first sight! - Ann-Marie Vaz says Daryl had to work to win her heart 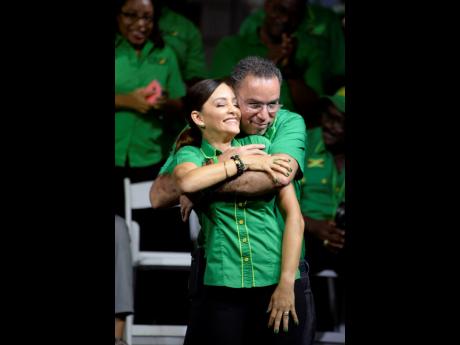 Without batting an eyelid, Ann-Marie Vaz, the Jamaica Labour Party’s (JLP) candidate for Portland Eastern, shattered the ‘bad boy’ image of her husband, Daryl Vaz, when she revealed that when she first laid eyes on him, he was just another ‘Joe looking a girl’.

Ann-MarieVaz, who will go up against the People’s National Party’s (PNP) Damion Crawford in the April 4 by-election, told The Sunday Gleaner last Thursday that when she first met Daryl at a birthday party years ago, she rolled her eyes when she saw that he was seeking her attention.

Her ‘not again’ groan was because she was at the wind-up stage of a previous relationship and she just wanted to chill. But as fate would have it, she relented and gave him her phone number – after persistent efforts by him to secure it – as she left his goddaughter’s birthday party.

When she was admitted to hospital the next day for appendicitis, Daryl Vaz called every medical professional he knew to make sure that she received optimal care.

“I like to say my relationship is a diamond because what you are seeing now is years of blending two families. We are a family of two fathers and two mothers and five children. It was not easy, but it was worth it. To have something now that people dream of, I am taken aback that people have a problem with a husband supporting a wife,” Vaz said last week, alluding to comments by Crawford on March 3 that JLP officials have called sexist.

“It was love at first sight for him; for him, yes. I walked into this room, and he can tell you up to the very shoes I had on down to this day. And I saw him speaking to a gentleman, and he turned and looked at me walking down. I saw his mouth drop open … ,” she told The Sunday Gleaner.

By the time she drove out, she was already regretting having given him her number because he started calling.

“Not even slightly,” she said without a blink.

“I never stood a chance against him. He moved heaven and earth. He told me later that he said to the gentleman to whom he was speaking, ‘My wife just walked in.’ This was December. He went to the movies with me for the first time in his life. And I don’t go to the movies. He just was not going to give up. And I remember, I would go with him but carry an entourage because I didn’t want anybody to think that I was with him … ,” she shared.

But it was during a trip to a bar in Irish Town, St Andrew, that she knew the moment she fell in love with him.

“I felt somebody looking on me, and I turned and looked into the doorway of the bar, and I saw him looking at me. And my stomach fell out my body. When they say that you fall in love, it actually happens. I just feel my stomach drop out of my body, and I said, ‘Jesus!’ One week later, they were engaged. We were married in eight months. I didn’t even know his middle name or what his favourite colour was,” she said.

“That love has taken us through hell and back. Every time I thought about going, that I wanted nothing more with this struggle, I just love him too much. Love always wins,” she said.