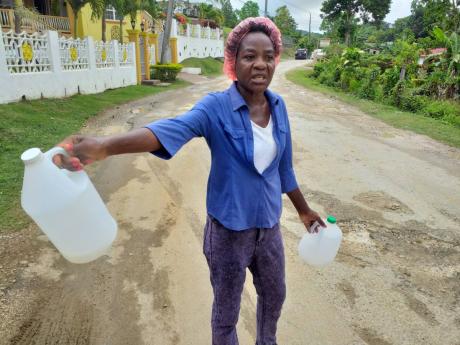 Gareth Davis
Sandra Dale, with bottles in hand, is about to start the three-mile journey to get water at Sherwood Forest in East Portland.

While constituents in East Portland were gearing up to cast their ballots in yesterday’s by-­election, Sandra Dale, a frustrated resident of Sherwood Forest in the parish, was making a miserable three-mile trudge to get water.

Armed with two gallon-size water bottles, Dale, 55, told The Gleaner that the water crisis in Sherwood Forest has been affecting residents for more than five decades even though their political representatives have, over the years, pledged to provide them with the commodity.

“I have been experiencing water shortage in this community from I was a child age three years old,” commented Dale.

She continued: “I have to be walking three miles every day to get water. No water at this pipe, no water anywhere. See mi have two jugs in mi hand right now fi go get water.

“Talk bout politics. Them voting today and mi have no water. The roads are in a deplorable state. They have no respect for people, and when water comes in the pipe, it is salt water, which no one can drink.”

Many communities in Portland suffer from saline contamination of underground water, a matter that the state-owned National Water Commission has said it cannot resolve.

According to Dale, consumption of the ­contaminated salty water has resulted in ­residents falling ill and having to seek medical attention. She criticised constituents for sitting idly by and accepting political neglect instead of demonstrating for water and the repair of bad road conditions.

The crater-filled roads, which stretch for more than two miles, are made worse by a lack of adequate drainage systems, allowing for ­ponding on the already badly damaged surface.

“It is rather frustrating for us living here as it seems that there is no real hope for us. People, over the years, just accept the situation, ­without giving any thought to wanting something ­better,” Dale lamented.

“This is a farming community with friendly ­people, but we are not getting the basic ­amenities, including road and water, which will definitely improve our living ­conditions,” she added.