Exports ‘tun up’ but not enough – Seaga 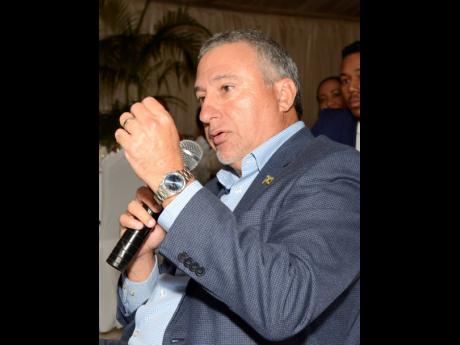 Jamaica’s impressive export performance for 2018 when the country recorded a whopping 37.8 per cent increase over the previous year, the highest growth in 10 years, was dampened by the failure to stem in any substantial way the country’s heavy dependence on imported goods, according to Metry Seaga, president of the Jamaica Manufacturers and Exporteers’ Association (JMEA).

At US$1.6 billion out of a total import bill of US$6.12 billion, the cost of fuel as an energy source continues to be a significant drag on the economy, with food at US$900 million and chemicals US$754 million being the third and fourth highest import categories, respectively, for the period.

In making this disclosure last week at the Global Thought Leaders Breakfast Forum to officially launch National Exporters’ Month at the Terra Nova All-Suite Hotel, St Andrew, Seaga highlighted some of the achievements which have done very little to put a dent into the US$4.24 billion trade deficit.

“If it was not for aluminium, we would not even have accomplished half of the export target set under the National Export Strategy 2, which comes to an end this year, with an export value of US$1.16 billion of our total export of US$1.82 billion, and crude and mineral fuels are our two largest imports of up to 80 per cent of total imports,” he disclosed.

The businessman argued that despite the growing popularity of Brand Jamaica, exporters have failed to deliver in any substantial way on the country’s reputation for producing the best pepper sauce, coffee, ginger, mango, castor oil and rum, among other items.

“We are less than 0.016 per cent of world trade in all of them. We are minute,” Seaga declared.

Redressing the trade imbalance in any meaningful way will require a concerted and sustained effort to grow exports to achieve much higher net earnings of foreign exchange, among other gains, the businessman pointed out.

“Where we can’t earn we must develop and promote a culture to save and invest. That is growing exports, promoting import substitution by buying Jamaican and creating stronger linkages, taking advantage of the investment opportunities and being more aggressive on diversifying our energy sources.

“So let us endeavour to earn, save and invest more for sustainable growth,” he appealed. “Prosperity becomes real for all, only if there is substantial progress in agriculture, manufacturing and export.”

‘Breaking Barriers, Building Bridges’ is the theme for National Exporters’ Month, and Seaga charged policymakers to help in achieving this goal by reducing the bureaucracy and costs of doing business.

For fellow industry players he had this challenge: “Let’s break down that barrier of distrust and misconceptions and cement the needed partnerships to flood not just the international market but also our own with Brand Jamaica.”