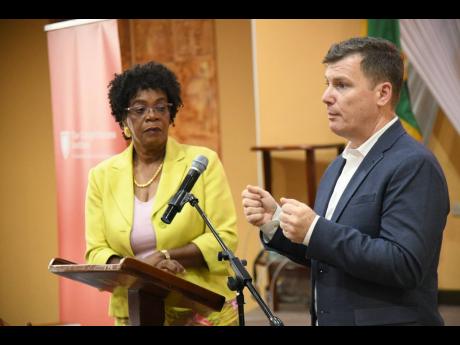 Rudolph Brown
Dr Beverly Morgan, CEO of the Competitiveness Company, looks on as Jim Fitt, CEO and founder of VelSoft, addresses the Competitiveness Institute’s ‘In Knowledge, There is Infinite Opportunity’ launch at the Jampro office in New Kingston on Wednesday, May 9.

Jamaica’s workforce education-improvement drive is poised to get a major boost following last week’s launch of the Competitiveness Institute, an online training portal that is a joint initiative of the Competitiveness Company and Velsoft, a leading Canadian provider of customisable training material that operates in 164 countries across the globe.

In endorsing the initiative, JAMPRO President Diane Edwards pointed to its timeliness in improving the competitiveness of the local workforce.

“The World Bank’s vice-president, who was visiting here, said that we have to invest more in our people, and I think that was such a critical pronouncement,” she told the launch ceremony at JAMPRO’s New Kingston head office.

Edwards then went on to underscore the importance of this intervention as a driver for global competitiveness.

“On the World Economic Forum (WEF) Global Competitiveness Report, we are number 76 out of 140 countries. That’s not a good look … . Trinidad and Tobago is at number 68,” said Edwards.

“We are actually in the lower-50 percentile of skilled people around the world, [and] it’s not a good place to be. If you look at innovation, we are also at 76 out of 140.”

“What is also interesting to remember is that the Fourth Industrial Revolution is here and now; it’s not coming. So JAMPRO has also realised just what we need to do to improve competitiveness in Jamaica, and that is the essence of what the two of you together can impact on.”

The JAMPRO president pointed out that the 2018 edition of the WEF report had introduced a new methodology that focused on the notion of the Fourth Industrial Revolution in the definition of competitiveness. It emphasised the role of human capital, innovation, resilience and agility as defining features of economic success.

“I really want to stress the question of agility. How quickly, how efficiently workers can update their skills, impact on new technologies, and adapt new technologies and respond to the new demands of marketplaces is really critical. So when it comes to competition, the companies who equip their citizens to learn faster and adapt faster will actually do better,” said Edwards.

“On that benchmark, we are not doing too well. So I think that this whole initiative will be a new beginning, and a new start is a really important step in helping us towards achieving that competitiveness that we seek.”

Meanwhile, chief executive officer and co-founder of Velsoft, Jim Fitt, explained that given its global reach, his company had the luxury of choosing where to invest, and its decision on Jamaica was informed by research.

“Unemployment is at a record or a near-record low, so that’s really good … . On the other hand, there are a lot of people who are in the workforce that will need to get improved, said Fitt. “A successful company is built on successful people. What we hope to do is to complement their skills.”

- The employer who wants to make their people better.

- The employees who themselves want to do better to grow in their organisations and build a better life for their families.

- People who are underemployed or unemployed and who want to become more valuable to employers.

For CEO of the Competitiveness Company, Dr Beverley Morgan, this collaboration is a welcome answer to its efforts to boost the sustainability and effectiveness of its capacity-building projects across the island.

“There isn’t a single parish in which we haven’t worked, and I think we’ve done a good job, but I’ve been really dissatisfied because you go out and you train, and you may do a good job, but then, it’s very hard to leave a footprint which is lasting when there is no funding for a follow-up,” she lamented.

Morgan said that the company has long recognised the value of being able to follow up with its beneficiaries after the various projects end in order to gauge their sustainability and continue to provide guidance and support where necessary.