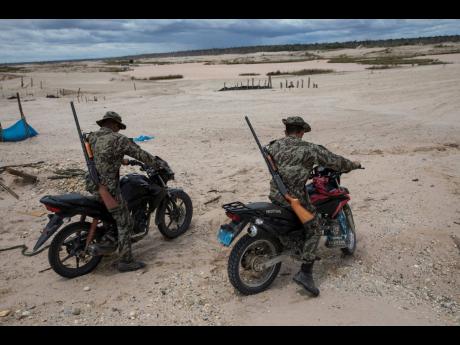 AP
In this March 27, 2019 photo, Operation Mercury soldiers patrol on motorbikes an area once used by illegal miners in Peru’s Tambopata province. Peruvian police and soldiers search for and destroy equipment used by illegal gold miners in a part of the Amazon rainforest where the mining transformed dense foliage into a desert pocked with dead trees and toxic pools.

In addition to being quite a mouthful, the United Nations Convention to Combat Desertification (UNCCD) would seem to be a misnomer for an agency operating in Latin America and the Caribbean and so while any confusion would be quite understandable, the UNCCD is not only quite appropriate for the region but also absolutely necessary, according to Dr Richard Byron-Cox, action programme alignment and capacity building officer.

In fact, some regional policymakers exhibit a blissful ignorance about the role of the UNCCD. For the most part, they display little or no appreciation for its pivotal, specialised mandate.

“We have no time for this desertification stupidness, our island green,” was the response from one government minister when Dr Byron-Cox broached the subject.

The policymaker then went on to explain that he had only agreed to see the UN executive as a matter of courtesy, instead of genuine interest.

“I only talk to you because is you, but if is somebody else, I tell him I have no time!”

Unfazed, Byron-Cox, a lawyer and trained diplomat whose UN portfolio revolves around science and technology, began his schooling of the government minister of a country whose economic base is centred on tourism.

“Because we have to send home some people.”

“Where those people come from that you sending home?”

“You exactly right. Haiti is our desert,” Byron-Cox advised.

Haiti today is acknowledged as the poorest country in the Western Hemisphere and the stark contrast in fortunes between it and the Dominica Republic is graphically illustrated in a flyover of the Hispaniola mainland.

“One part is green and the other part is brown because one area has desertification. That part is Haiti, which, 150 years ago, had the best soils in the region. It had the greatest sugar production back when it was a French colony,” the senior UN executive disclosed.

Byron Cox went on to explain that contrary to any perceived misinterpretation, combating desertification has nothing to with fighting against natural deserts such as the Namib or Namib Sand Sea, the official name of the desert from which Namibia derived its name. This coastal souther Africa desert – which stretches for more than 2,000 kilometres, spanning the Atlantic coast of Angola, Namibia and South Africa – contains some of the world’s driest regions, with only South America’s Atacama Desert challenging this UNESCO World Heritage Site for age and aridity benchmarks.

Still, the United Nations’ mission to combat desertification has nothing to do with fighting natural deserts.

He explained: “Desertification happens when very good land is treated so badly that it takes on the features of a desert and, therefore, loses its productivity – bad land too degraded to sustain life. So we are fighting to ensure that good land doesn’t become bad, and if you think this has nothing to do with the Caribbean, you’re very wrong because we realise that in every part of the world, there is a process of desertification happening, and if it doesn’t stop, then we going to have a problem.”

That is putting it mildly according to Landscapes For Life: Integrated Management of Landscapes and Seascapes for Sustainable Food and Agriculture, a document which states that natural systems that provide the foundation for sustainable agriculture are being degraded at unprecedented rates. The Food and Agriculture Organization publication then goes on to provide some context for the global implications of this worrying trend.

It warns: “By 2050, food and production and overall food-system efficiency must increase by almost 50 per cent to adequately serve the needs of 10 billion people. The future integrity of the global food supply, the direct livelihoods of several billion people and the stability of global ecosystems will depend on our ability now to strengthen the resilience of production landscapes and seascapes, restore degraded lands and forests, conserve soils, stabilise watersheds and restore water quality and ocean health.”