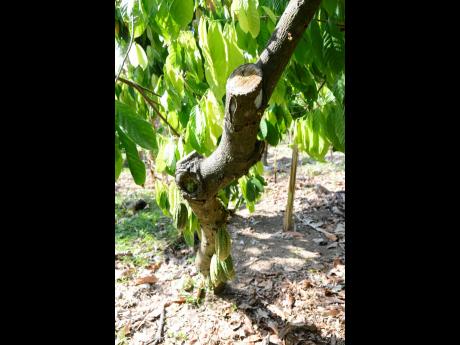 Ian Allen/Photographer
Cocoa plants that have been radically pruned in Enfield, St Mary, leaving the plants at risk of dying. 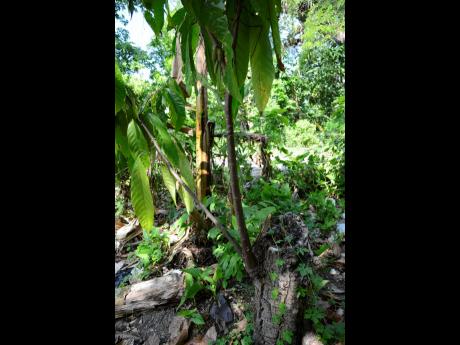 Ian Allen/Photographer
Cocoa plants which have been radically pruned in Enfield, St Mary, leaving the plants at risk of dying.
1
2

Stakeholders are accusing the Plant Quarantine Division in the agriculture ministry of mismanagement in the fight to eliminate the frosty pod rot disease.

The division, which took over the programme to battle the devastating disease from the Cocoa Industry Board, is being blamed for the death of many cocoa trees.

Vice-president of the World Cocoa Farmers’ Association, Hugh Johnson, says the local cocoa crop is facing a greater threat from the people entrusted with safeguarding it than from the dreaded fungal disease, which has the potential to wipe out the industry.

Johnson said the Plant Quarantine Division is forcing farmers to undertake severe or radical pruning of cocoa trees with as much as 90 per cent of the plants removed. This has resulted in the death of many trees in full bearing and has stunted the growth of others.

“Minister, I recommend that you remove this operational activity from the Plant Quarantine Division. RADA (Rural Agricultural Development Authority), I think, is the only agency that has the capacity to do it,” Johnson appealed to Agriculture Minister Audley Shaw at the press conference last Wednesday. “I was the one who complained about Cocoa Board not handling it properly, prompting Minister (Karl) Samuda to remove it, … but it is 10 times worse. So I beg you, Minister, let us deal with it.”

Johnson had long complained to The Gleaner that the pruning measures implemented by the division were too extreme and threatened the viability of the plants. Local experts were only guided by the limited available literature on the fungal disease, which prompted the Inter-American Institute for Cooperation (IICA) to intervene.

“I actually led a decision makers mission to Colombia and Peru so that the folks who make the decision on what to do about frosty pod, they saw examples in two countries that not only have the trilogy of cocoa diseases – black pod, witches broom and frosty pod rot – in the last 15 years, but whose industry are now thriving. So it was for these decision makers to go and talk to the main stakeholders in the sector and learn what’s working for them that can be adapted to Jamaica,” IICA Country Representative Dr Elizabeth Johnson told The Gleaner.

“That was part of the reason for the trip, actually. It was an educational [exercise] to show actually how other countries are not only managing this disease, but also thriving with cocoa production,” she added.

Pressed as to whether she thought the Jamaicans had learnt from the experience in Colombia and Peru, Dr Johnson said, “The sector in Jamaica is very complicated, indeed, and there are a number of things that can be done differently, but to where the situation is in the industry with regard to frosty pod rot, I prefer to reserve my comment and say I would let those in charge of the programme speak.”

Hugh Johnson, however, was much more forthright.

“IICA at the start of it told us what to do, but Plant Quarantine went opposite of what was recommended and that is why we are where we are now,” he said.

He told The Gleaner that cocoa production is “almost zero” as a result of the measures implemented by the Plant Quarantine Division.

When The Gleaner tried to get answers from Damian Rowe of the Plant Quarantine Division last month, he declined to respond on the grounds that the information request would have to go the formal route, with the assurance of a speedy answer.

“Write to the permanent secretary, Mr Dermon Spence, and he will channel it down to us. We will answer you appropriately,” he said.

Eight questions were sent to the permanent secretary on July 29. The Gleaner is still awaiting a formal response.