Skip to main content
On The Corner With EPOC

On the Corner with EPOC | Make tax dollars work for masses, urges Duncan 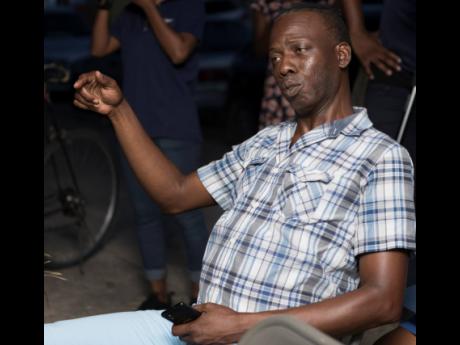 Gladstone Taylor
Barrington Maise, a resident of Arnett Gardens in South St Andrew, makes a point during a Gleaner On the Corner with the Economic Programme Oversight Committee fourm held in the constituency last Monday.

Government needs to show and explain to the masses the efficiency of the tax spend asserts Keith Duncan, chairman of the Economic Programme Oversight Committee (EPOC).

“We want to see our tax dollars being spent properly so that we can get the benefit in order for us to minimise corruption,” he said, during the latest Gleaner On The Corner with EPOC series, held at Pelpas Bar in Arnett Gardens last week.

Duncan was responding to questions from members of the community, who raised concerns about the lack of support given to the South St Andrew constituency.

One resident, Barrington Maise, questioned whether the poor in so-called inner-city communities, such as Arnett Gardens, are benefiting from the tax they pay.

Maise explained that he was “born and raised” in the community, but noted that after the “sheen” left the area, it has devolved into what “uptown people call a ghetto”.

He said the community is only labelled a ghetto because of its inadequate social infrastructure even though the residents pay taxes.

“I am from this community. I have been here from when we used to put board house pon truck and carry dem go Riverton. It is a nice community, but what I am seeing is that there is no infrastructure for the youth. Nothing has been laid out for them,” said Maise.

“During all the processes of time, as far as I see, the taxes that the people of this community put out are not helping. No matter how it seems, when we go buy a pound of flour we pay tax, when we go on the bus, we pay tax, but where do our taxes go?”

NOT TAUGHT TO UNDERSTAND TAX

Jamaicans, he reasoned, were not taught how to understand what taxes are and how it used to for the betterment of the country.

“What’s happening right now is that Jamaicans don’t even know half of what the tax is used for. We don’t understand what is going on, and when you take the money from one place and put in another and people don’t understand why that is done they quickly become frustrated.

“People here are paying them bills enuh, but the authorities are saying, this is South St Andrew, a ghetto. But no ghetto exists in reality. It’s the classification of poor people they call ghetto. So, when you say ghetto, is really the people you talking about,” said Maise.

Duncan noted that he, too, was concerned about the spend of the tax dollar, stating that had Jamaica set the right priorities dating back some 50 years, the country would be far better off for it.

“We as a country have not invested in the areas that we should have been investing. Did we run a solid economy for the last 50 years? No,” he replied.

“And this means the right investment in health, education, water, and national security so that all Jamaicans can earn more and be able to advance in life,” said Duncan.

The Government raked in some $542.9 billion in tax revenues for the period ending March 2019, surpassing the set target of $516.0 billion.