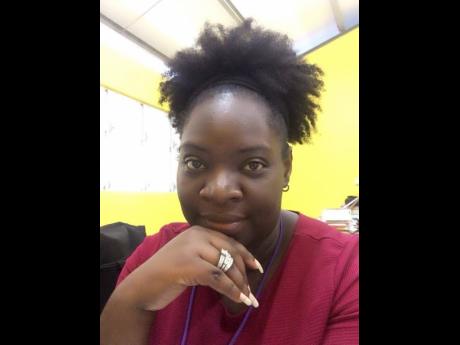 If anyone had told Corrie Cunningham Brooks that one day she would be penning an inspiring book of poetry, she would have laughed, because growing up, spelling was a big challenge for her.

Cunningham, who recently released her book of poetry titled A Journey Not Yet Complete: An Anthology, says it is a unique collection of thoughts inspired by God. Her goal for the book is that it will ignite hope in the hearts of those who read it.

In an interview with Family and Religion, Cunningham Brooks said her life was the catalyst for most of the content in the book, as growing up, if anyone needed hope it was her.

She recalls going to primary school and only being able to buy Nutri-bun and milk, and on the days when they were not available, she had to make do with 20 cents worth of police buttons (cookies).

With her mother working in the tuck shop at St Hilda’s High School and her father a tailor, it was struggle for the family to make ends meet.

“I remember days when my mother would pick up coins from off the streets in order to provide me with lunch money. I also remember how discoloured some of the coins were when she found them, and she would sometimes spend hours using a special bush to clean them,” she shares.

Although her parents bought books and stressed the importance of education, Cunningham Brooks recalls being a terrible speller in grade four. She remembers at one point being given words to spell and spelling all of them incorrectly.

“It is amazing that I have managed to fall in love with writing and have managed to write a book,” said Cunningham Brooks, who is now a trained teacher at Brown’s Town High School in St Ann. She credits most of her success and determination in beating the odds to her Christian background.

Stating that she accepted the Lord as her Saviour at an early age, Cunningham Brooks says her walk has been an interesting one.

“I have failed to be who He has called me to be on numerous occasions, but He has never failed me. He has enabled me to grow from strength to strength, and although I am anything but perfect, I can thank Him today because He has brought me a mighty long way,” she says.

Cunningham Brooks admits that for years she resented the fact that her parents sent her to teachers’ college when her heart was set on going to drama school. However, today she is thankful for their insistence that she focused on a profession in teaching.

Concerning her book, Cunningham Brooks says, “My hope is that as each reader joins me on this journey not yet complete, they will be lifted from whatever position they are in, to a higher place.” The book is available on Amazon.