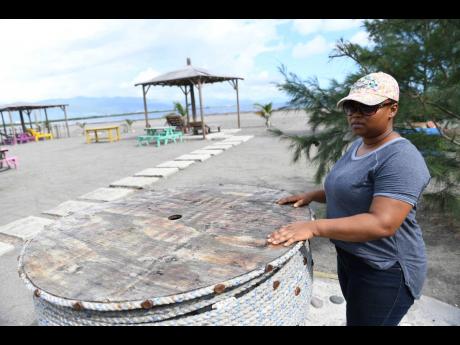 The owner of the beach view restaurant in Port Royal facing the impending demolition of her Kingston business is intensifying her fight to remain on the property.

A notice dated January 2019 and served in the name of the commissioner of lands warned that the “illegal occupant” was required to cease operation and vacate the premises.

But Tashnee Tomlinson is maintaining that she has a right to the property and has now engaged attorney-at-law Bert Samuels to act on her behalf.

In a letter to the commissioner of lands, Samuels said that Tomlinson is a direct descendant of the original Port Royal Prawl/Webster family, and so her claim is by family heritage, and the government should recognise this.

Tomlinson has occupied the property for the past than 30 years.

“We are of the view that should these lands be that of the Government of Jamaica, our client should be negotiated with to settle on the lands,” Samuels wrote.

Tomlinson has shared memories of her childhood and produced documents in support of her grandfather Lionel Henry Webster’s service as a linesman with the Royal Army Service Corps.

He was one of four children for Carolyn Miller, a white seamstress who mothered three daughters – her aunts Tooks, Jenny, and Connie Webster.

Mother, grandmother, and Aunt Gela would regale the youngster with stories to keep her wondering for days on end. Tomlinson said they told her that Port Royal was a bustling community until Hurricane Charlie devastated the area in 1951.

Thereafter, most families were forced to relocate to the Old Naval Hospital.

Her grandfather who lived at 24 New Street, Port Royal, was a fisherman and also worked with the Royal Army Service Corps.

“My great-grandparents and my grandfather were of British nationality, and Jamaica had not yet gained political independence. My Aunt Gela told me that in those days, they never have a morgue, so they usually kept the dead for two days and buried them on the third,” she said.

Tomlinson also said that when her grandmother died, her Aunt Gela slept on the bed beside her the first night, and on the second day they iced the body, placed onion over the eyes, and put it to the side of the building in which they were living.

“On the third day, they put the body on a cart and pushed it along the road to the place of burial,” she said.

Growing up in the sea town of Port Royal was idyllic for Tomlinson and her brothers, roaming all over, picking sea grapes, which were aplenty during summer, and catching fish to cook.

They would also tour the old fort and the Giddy House, explore the wharf, and jump into the sea before heading home tired but happy, to have a bath, comb their hair, and have dinner.

Those were the good old days says Tomlinson as she grew, it was only natural that since she was surrounded by lots of cooking, she would make a business out of it and open the Beach View Restaurant and Bar.

Located on the beach directly behind her dwelling house, the business serves as a community centre of sorts and is Tomlinson’s way of giving back just a little of the love and care that have been passed down from her ancestors.